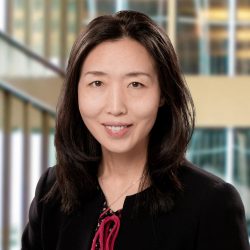 Jing Yang was appointed Managing Director of the Bank of Canada’s Financial Stability Department (FSD) effective November 12, 2019. In this capacity, she leads the Bank’s analysis and research on issues related to the financial sector in Canada and abroad; the assessment of risks to financial system stability; and the oversight of systemically important payment clearing and settlement systems.

Prior to joining the Bank of Canada, Ms. Yang worked at the Bank for International Settlements and the Bank of England, where she held various positions with increasing responsibilities. She has also had a short span at the European Central Bank. Ms. Yang’s research has extended across almost every area of central banking. Her work on the optimal level of bank capital was covered by The Financial Times and The Economist Magazine and has been replicated by a number of central banks.

COVID and Financial Stability: Practice Ahead of Theory

Implementation and Effectiveness of Extended Monetary Policy Tools: Lessons from the Literature

A Horse Race of Monetary Policy Regimes: An Experimental Investigation

Following the Money: Evidence for the Portfolio Balance Channel of Quantitative Easing

Alternative Trading Systems: Does One Shoe Fit All?

The Application of Artificial Neural Networks to Exchange Rate Forecasting: The Role of Market Microstructure Variables

Unconventional Monetary Policy: The Perspective of a Small Open Economy

Bank of Canada Review - Spring 2016 Jonathan Witmer, Jing Yang
Recently, the Bank of Canada has estimated the effective lower bound (ELB) on its policy interest rate to be about -50 basis points. This article outlines the analysis that underpins that estimate by quantifying the costs of storing and using cash in Canada. It also explores how some international markets have adapted to negative interest rates, issues surrounding their implementation, as well as their transmission to other interest rates in the economy. Finally, it discusses theoretical ideas on how the ELB could be reduced further.
Content Type(s): Publications, Bank of Canada Review articles Topic(s): Monetary policy framework, Monetary policy implementation, Monetary policy transmission JEL Code(s): D, D5, D53, E, E4, E43, E5, E52, E58