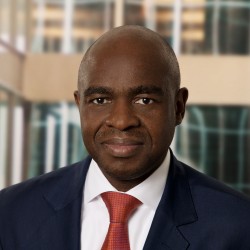 Césaire Meh was appointed Senior Research Officer of Economic and Financial Research, effective November 1, 2017. In this capacity, he provides intellectual leadership to Bank-wide research, especially on issues related to the nexus between monetary policy and financial stability and to macroprudential policies. He has published extensively in peer-refereed journals and was recently a Visiting Research Scholar at Princeton University.

Most recently, Mr. Meh was the Managing Director of the International Economic Analysis Department. There, he was responsible for the management and strategic direction of the department, for providing policy advice and analysis on global economic and financial developments, and for participating in various international policy forums such as the G20, G7 and International Monetary Fund. He has represented the Bank in the G20 Framework Working Group, the Macroprudential Supervision Group of the Basel Committee on Banking Supervision (BCBS) and the Macroeconomic Assessment Group of the Financial Stability Board. For the latter, he led the production of the Bank of Canada report, Strengthening International Capital and Liquidity Standards: A Macroeconomic Impact Assessment for Canada. He also chaired the workstream on the implementation of the Basel III countercyclical capital buffer.

Mr. Meh joined the Bank in 2001 as an economist in the former Monetary and Financial Analysis Department (MFA). He increasingly assumed greater responsibilities in his roles as Principal Researcher, Assistant Director of the monetary financial modelling division in MFA, Senior Research Director in the Canadian Economic Analysis Department and Senior Policy Director in the Financial Stability Department (FSD). He was then named the Deputy Managing Director of FSD, where he assisted the Managing Director in the management of the department and oversaw FSD’s contributions to the Bank’s semi-annual Financial System Review and the work on bail-ins of large Canadian banks, as well as its support for the Bank in its role as lender of last resort.

Investing in Monetary Policy Independence in a Small Open Economy

Household Debt, Assets, and Income in Canada: A Microdata Study

Gazing at r-star: A Hysteresis Perspective

The Welfare Cost of Inflation Revisited: The Role of Financial Innovation and Household Heterogeneity

Effects of Funding Portfolios on the Credit Supply of Canadian Banks

Innovation and Growth with Financial, and Other, Frictions

Household Borrowing and Spending in Canada

Bank of Canada Review - Winter 2011-2012 Jeannine Bailliu, Katya Kartashova, Césaire Meh
Understanding how much of the increased debt load of Canadian households has been used to finance household spending on consumption and home renovation is important for the conduct of monetary policy. In this article, the authors use a comprehensive data set that provides information on the uses of debt by Canadian households. They first present some facts regarding the evolution of Canadian household debt over the period from 1999 to 2010, emphasizing the increased importance of debt flows that are secured by housing. They then explore how Canadian households have used their borrowed funds over the same period, and assess the role of these borrowed funds in financing total consumption and spending on home renovation. Finally, they examine the possible effects of a decline in house prices on consumption when housing equity is used as collateral against household indebtedness.
Content Type(s): Publications, Bank of Canada Review articles Topic(s): Credit and credit aggregates, Domestic demand and components, Monetary policy transmission JEL Code(s): E, E2, E21, E5, E51, H, H3, H31
August 18, 2011

Bank of Canada Review - Summer 2011 Césaire Meh
The author investigates the influence of bank capital on economic activity, using a macroeconomic model that incorporates an explicit role for financial intermediation. The analysis focuses on the role of a “bank-capital channel” in propagating and amplifying monetary policy actions and other shocks. The question of whether weaker bank balance sheets make the economy more vulnerable to adverse shocks is examined, together with the impact of initiatives, such as countercyclical capital buffers, on the transmission of monetary policy and other shocks to the real economy.
Content Type(s): Publications, Bank of Canada Review articles Topic(s): Economic models, Financial institutions, Financial system regulation and policies, Monetary policy transmission
August 19, 2010

Bank of Canada Review - Summer 2010 Jean Boivin, Césaire Meh, Timothy Lane
The authors examine whether monetary policy should and could do more to lean against financial imbalances (such as those associated with asset-price bubbles or unsustainable credit expansion) as they are building up, or whether its role should be limited to cleaning up the economic consequences as the imbalances unwind.
Content Type(s): Publications, Bank of Canada Review articles Topic(s): Financial system regulation and policies, Monetary policy framework
April 7, 2009

Bank of Canada Review - Spring 2009 Allan Crawford, Césaire Meh, Yaz Terajima
Many central banks around the world have embraced inflation targeting as a monetary policy framework. Interest is growing, however, in price-level targeting as an alternative. The choice of frameworks has important consequences for financial contracts, most of which are not fully indexed to the price level. Changes in the price level therefore lead to changes in the real value of contracts.
Content Type(s): Publications, Bank of Canada Review articles Topic(s): Inflation targets, Inflation: costs and benefits, Monetary policy framework
April 5, 2009

Unexpected Inflation and Redistribution of Wealth in Canada

Bank of Canada Review - Spring 2009 Césaire Meh, Yaz Terajima
One of the most important arguments in favour of price stability is that unexpected inflation generates changes in the distribution of income and wealth among different economic agents. These redistributions occur because many loans are specified in fixed dollar terms and unexpected inflation redistributes wealth from creditors to debtors by reducing the real value of nominal assets and liabilities.
Content Type(s): Publications, Bank of Canada Review articles Topic(s): Central bank research, Inflation and prices, Inflation: costs and benefits, Sectoral balance sheet
September 15, 2008

Bank of Canada Review - Autumn 2008 Danny Leung, Césaire Meh, Yaz Terajima
The research findings highlighted in this article suggest that firm-size differences play a significant role in explaining the productivity gap between Canada and the United States. The authors review factors that lead to a positive relationship between productivity and size and then look at Canadian evidence of this relationship at the firm level. They quantify the extent to which the change in Canadian productivity as well as the Canada-U.S. productivity differences can be accounted for by the change in the importance of large firms and identify several factors that play a role in determining average firm size and aggregate productivity.
Content Type(s): Publications, Bank of Canada Review articles Topic(s): Productivity
October 8, 2006

Bank of Canada Review - Autumn 2006 Ian Christensen, Ben Fung, Césaire Meh
The Bank of Canada considers a wide range of information and analysis before making a monetary policy decision and uses carefully articulated models to produce economic projections and to examine alternative scenarios. This article describes an ongoing research agenda at the Bank to develop models in which financial variables play an active role in the transmission of monetary policy actions to economic activity. Such models can help to analyze information from the financial side of the economy and to provide an overall view of the implications of financial developments for the current economic outlook. The authors also explain how this research can help address other issues relevant to the objectives of monetary policy, including how asset-price movements should be taken into account in the monetary policy framework.
Content Type(s): Publications, Bank of Canada Review articles Topic(s): Credit and credit aggregates, Economic models, Monetary policy transmission

The Residential Mortgage Market in Canada: A Primer

The Role of Bank Capital in the Propagation of Shocks