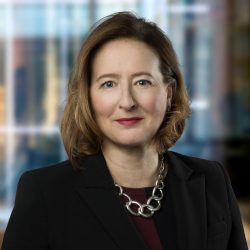 Carolyn A. Wilkins served as Senior Deputy Governor from May 2014 to December 2020. In this capacity, she oversaw the Bank’s strategic planning and economic and financial research. As a member of the Bank’s Governing Council, she shared responsibility for decisions with respect to monetary policy and financial system stability. Ms. Wilkins also oversaw the Bank’s analysis of international economic developments in support of monetary policy decisions and served as a member of the Bank’s Board of Directors.

Ms. Wilkins was the Bank of Canada’s G20 and G7 Deputy. She represented the Bank on the Financial Stability Board (FSB) Plenary and was a member of the FSB’s Standing Committee on Assessment of Vulnerabilities. She also served as a member of the International Monetary Fund’s High-Level Advisory Group on Finance and Technology and the Group of Trustees of the Principles for Stable Capital Flows and Fair Debt Restructuring at the Institute of International Finance. She previously represented Canada on the Basel Committee on Banking Supervision (BCBS) and co-chaired the BCBS Working Group on Liquidity.

During the COVID-19 pandemic, Ms. Wilkins oversaw the development of the Bank’s market liquidity facilities and large-scale asset purchase program. As Deputy Managing Director of the Financial Markets Department in 2008, she led the development and implementation of extraordinary liquidity tools and collateral policy deployed during the financial crisis.

Before her appointment as Senior Deputy Governor, Ms. Wilkins was Advisor to the Governor, with a focus on the Canadian economy, its interaction with the financial system, and monetary policy. As Managing Director of the Bank’s Financial Stability Department from 2011 to 2013, Ms. Wilkins led the Bank’s research and analysis of financial system issues in Canada and abroad. Prior to joining the Bank in 2001, Ms. Wilkins held senior analytical roles related to economic forecasting and fiscal policy development, at both the Department of Finance Canada and the Privy Council Office.

Exploring life after COVID-19: the far side of the moon

Remarks (delivered virtually) Carolyn A. Wilkins Bank of Canada Workshop: “Toward the 2021 Renewal of the Monetary Policy Framework” Ottawa, Ontario
Senior Deputy Governor Carolyn A. Wilkins discusses the challenges the Bank of Canada is facing as it seeks to renew its inflation-control target in 2021. Kicking off a day-long workshop on the renewal of the monetary policy framework, she explains how the Bank’s research on alternative frameworks is shaping up and invites discussion of how the COVID-19 crisis has changed what is known about alternative policy tools in action.
Content Type(s): Press, Speeches and appearances, Remarks Topic(s): Central bank research, Inflation targets, Monetary policy, Monetary policy and uncertainty, Monetary policy framework
May 4, 2020

Our Economic Destiny: Written in R-stars?

Monetary Policy Frameworks in a World of Low Interest Rates

Why Do Central Banks Care About Market Power?

Crypto ‘Money’: Perspective of a Couple of Canadian Central Bankers

Asset-Price Misalignments and Monetary Policy: How Flexible Should Inflation-Targeting Regimes Be?

Does Financial Structure Matter for the Information Content of Financial Indicators?

Bank of Canada Review - Autumn 2009 Lorie Zorn, Carolyn A. Wilkins, Walter Engert
In response to the financial crisis of 2007-09, the Bank of Canada intervened repeatedly to stabilize the financial system and limit the repercussions of the crisis on the Canadian economy. This article reviews the extraordinary liquidity measures taken by the Bank during this period and the principles that guided the Bank's interventions. A preliminary assessment of the term liquidity facilities provided by the Bank suggests that they were an important source of liquidity support for some financial institutions and, on a broader basis, served to reduce uncertainty among market participants about the availability of liquidity, as well as helping to promote a return to well-functioning money markets.
Content Type(s): Publications, Bank of Canada Review articles Topic(s): Financial institutions, Financial markets, Financial stability
June 2, 2006

Another Look at the Inflation-Target Horizon

Bank of Canada Review - Summer 2006 Donald Coletti, Jack Selody, Carolyn A. Wilkins
The conduct of monetary policy within an inflation-targeting framework requires the establishment of an inflation-target horizon, which is the average time it takes inflation to return to the target. Policy-makers have an interest in communicating this horizon, since it is likely to help anchor inflation expectations. This article focuses on the determination of the appropriate policy horizon by reporting on two recent Bank of Canada studies. The evidence suggests that the current target horizon of six to eight quarters remains appropriate. It is important to note that the duration of the optimal inflation-target horizon varies widely, depending on the combination of shocks to the economy. In rare cases when the financial accelerator is triggered by a persistent shock, such as an asset-price bubble, it may be appropriate to take a longer view of the inflation-target horizon.
Content Type(s): Publications, Bank of Canada Review articles Topic(s): Inflation targets, Monetary policy framework, Monetary policy transmission
November 24, 2004

Asset Prices and Monetary Policy: A Canadian Perspective on the Issues

Bank of Canada Review - Autumn 2004 Jack Selody, Carolyn A. Wilkins
The issue addressed in this article is the extent to which monetary policy in Canada should respond to asset-price bubbles. The article concludes that maintaining low and stable consumer price inflation is the best contribution that monetary policy can make to promoting economic and financial stability, even when the economy experiences asset-price bubbles. In extreme circumstances—when an asset-price bubble is well identified and likely to have significant costs to the economy when it bursts—monetary policy might better maintain low and stable consumer price inflation by leaning against a particular bubble even though it may mean that inflation deviates temporarily from its target. Such a strategy might reduce the risk that a crash in asset prices could lead to a recession and to inflation markedly below target in the longer run. The circumstances where this strategy is possible will be rare because economists are far from being able to determine consistently and reliably when leaning against a particular bubble is likely to do more harm than good. Housing-price bubbles should be a greater concern for Canadian monetary policy than equity-price bubbles, since rising housing prices are more likely to reflect excessively easy domestic credit conditions than are equity prices, which are largely determined in global markets.
Content Type(s): Publications, Bank of Canada Review articles Topic(s): Inflation targets, Monetary and financial indicators, Monetary policy framework
November 22, 2004

Bank of Canada Review - Autumn 2004 Pierre St-Amant, Carolyn A. Wilkins
At the 12th annual Bank of Canada economic conference, held in Ottawa on 4 and 5 December 2003, representatives from various public and private organizations and Bank of Canada staff discussed papers presented on three key issues affecting the financial system: financial contagion, the implications of bank diversification, and financial sector regulation. Papers on financial contagion studied the effect of globalization on Canadian foreign-asset exposures, developed a general-equilibrium model of a competitive interfirm lending market in which firms can borrow or lend, and used market-based indicators to determine the probability that contagion can be generated by interbank exposures. The papers on bank diversification focused on the links between the changing behaviour of financial institutions and risk-return trade-offs. Issues of financial sector regulation included the relationship between governance and financial sector soundness, the theoretical basis of bank regulations for capital requirements, and the implications of bank capital requirements for the transmission of monetary policy. A panel discussion provided extended discussion of the conference papers.
Content Type(s): Publications, Bank of Canada Review articles Topic(s): Financial institutions, Financial markets, Financial services

The Bank of Canada’s Extraordinary Liquidity Policies and Moral Hazard

Financial System Review - June 2010 Carolyn A. Wilkins, Jack Selody
Bank of Canada published a report establishing a set of principles to guide the extraordinary liquidity interventions it was making in response to the systemic shocks buffeting the Canadian financial system. These principles provided a framework for maintaining consistency between the Bank’s actions and its responsibilities as lender of last resort to the financial system, while allowing sufficient fl exibility to respond to the unique challenges of the crisis.
Content Type(s): Publications, Financial System Review articles
June 20, 2010

Securitized Products, Disclosure, and the Reduction of Systemic Risk