Good morning. Thanks for coming out on this beautiful summer day. Governor Poloz and I are pleased to be here to answer your questions about today’s interest rate announcement and our Monetary Policy Report (MPR). Let me start by reviewing recent developments in the Canadian economy, before turning to key points from Governing Council’s deliberations.

The Canadian economy has been recovering from the rough patch we saw at the end of 2018 and beginning of 2019. In fact, recent economic data have led us to upgrade our projection for the second quarter. That’s largely due to a surge in oil production and a bounce-back from weather-related slowdowns earlier this year. We now expect that economic growth will ease over the summer and will average around potential output growth over the second and third quarters. At the same time, inflation remains around 2 percent.

The fact that Canada is picking up while the US economy is slowing sounds like a divergence. In fact, it’s a process of convergence. This is because the two countries are at different points in the economic cycle. The United States is slowing to a more sustainable pace, while Canada is moving back up to its trend growth. Activity here at home is being supported by a policy rate that’s lower than  south of the border. By the second half of this year, growth should be similar in both economies as they converge on their respective potential level of activity.

Meanwhile, at the global level, escalating trade conflicts and geopolitical tensions have been taking even more of a toll on trade and business investment than we expected. Several major central banks have said they are ready to provide more accommodative monetary policy or have already taken policy actions. In this context, global interest rates have fallen considerably since April, and the Canadian dollar has strengthened.

We have said that we are paying particular attention to Canadian household spending and the oil sector. Consumption has rebounded and should continue to be supported by a solid labour market. So far this year we’ve seen strong job growth—unemployment is still near historic lows—and wage growth has picked up. Also, the housing market is evolving as expected at the national level. Adjustments to previous speculative activity and changes in housing financing conditions have been difficult in some markets. We’re seeing signs that the housing market is improving in the Greater Toronto Area, while prices and activity are still adjusting to more sustainable levels in the Greater Vancouver Area, and Alberta’s market continues to adjust to lower oil prices. At the same time, interest rates on five-year fixed-rate mortgages have fallen recently to around where they were five years ago, which is relevant for people buying a new house or renewing their mortgage. It also reinforces our view that residential investment is once again contributing to growth.

In the oil and gas sector, we expect that transportation constraints for crude oil will ease gradually. The Trans Mountain Pipeline expansion will provide a welcome boost to capacity, although the pipeline will come online beyond our projection horizon. There are also some positive developments in offshore oil in Newfoundland and Labrador. Despite this, we expect overall investment in this sector to contract further in 2019 before stabilizing over the next two years. All told, this would bring oil and gas investment down by 20 percent since 2017, on top of the 50 percent drop seen following the 2014 oil price shock. It’s worth reminding ourselves that oil and gas production is still contributing some $65 billion annually to the Canadian economy. In addition, construction related to Trans Mountain and to the liquefied natural gas terminal in British Columbia will add to business investment.

While recent export data for Canada have been encouraging, the trade environment continues to be the biggest wild card in our outlook. Governing Council spent considerable time discussing developments on this front. Since our April MPR, the tariffs that the United States had imposed on aluminum and steel, as well as Canada’s countermeasures, have been removed. And, there has been some progress toward ratification of the Canada-United States-Mexico Agreement. This is welcome news. On the other side of the ledger, the actions that China has taken against some Canadian agricultural products and the fact that the US–China trade war is still ongoing are clear negatives.

We have increased our estimate of the impact that trade actions and related uncertainty are having on the economy, both globally and within our borders. For Canada, while exports are still expected to grow over the next couple of years, we forecast them to be around 1½ percent lower than they would have been without the trade uncertainty. We have also marked down the level of investment by 3 percent in 2021 for the same reason. Investment outside the oil and gas sector is still expected to expand, nonetheless. Businesses across Canada tell us they plan to invest to increase competitiveness or to meet demand for their products. Here’s the bottom line: when we take into account the impact on the global economy and commodity prices, trade conflicts and uncertainty are projected to reduce the level of Canadian GDP by as much as 2 percent by the end of 2021.

Staff did some excellent work to inform our discussion, and you can see the results in Box 2 of the MPR. They analyzed two scenarios that can be thought of as extremes: an unfavourable scenario in which trade conflicts escalate significantly, and a favourable scenario in which they are resolved. They held fiscal and monetary policy unchanged so that the economic effects would be more visible.

The results are clear. The impact on growth, both globally and in Canada, is much larger in the unfavourable scenario than in the favourable one. That underscores how much we all have to lose if the trade war escalates.

As for inflation, it actually rises in the unfavourable scenario, even as the economy weakens. That’s because a full-blown trade war would affect supply. Trade patterns and global value chains would be severely disrupted. This would lower productivity and reduce economic potential. It would threaten our living standards.

At the same time, slower global growth in this scenario reduces commodity prices and leads to a sharp decline in the Canadian dollar. While a lower currency would help contain the decline in exports, it would also put strong and persistent upward pressure on prices, as would the direct effects of the tariffs. It’s clear that monetary policy could not simultaneously buffer the impact on growth and keep inflation in check. Central banks in advanced economies have not faced this type of trade off since the 1970s.

Of course, during our deliberations Governing Council also discussed the Bank’s ultimate mission—inflation control. Our core inflation measures have averaged close to 2 percent in recent quarters. Total inflation will likely dip in the upcoming months due to the dynamics of gasoline prices and some other temporary factors. It is expected to return sustainably to target by around mid-2020 as slack in the economy is absorbed and these temporary effects wane.

Let me wrap this up. The Canadian economy is returning to potential growth. However, the outlook is clouded by persistent trade tensions. Taken together, the degree of accommodation being provided by the current policy interest rate remains appropriate. As Governing Council continues to monitor incoming data, we will pay particular attention to developments in the energy sector and the impact of trade conflicts on the prospects for Canadian growth and inflation.

Finally, I would like to say a few words about Deputy Governor Lynn Patterson, who will retire from the Bank of Canada next week. Her contribution over the last six years to the Bank, and to Canada, has been exceptional, in matters as diverse as financial markets, payments, and monetary policy. She will be a hard act to follow.

With that, Governor Poloz and I will now take your questions. 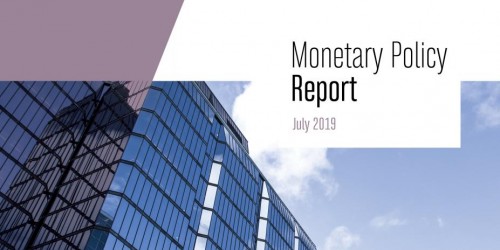 The Bank updated its forecast for real economic growth to 1.3 percent this year, 1.9 percent next year and 2.0 percent in 2021.

Media Relations Ottawa, Ontario
The Bank of Canada today maintained its target for the overnight rate at 1 ¾ percent. The Bank Rate is correspondingly 2 percent and the deposit rate is 1 ½ percent.
Content Type(s): Press, Press releases
July 10, 2019 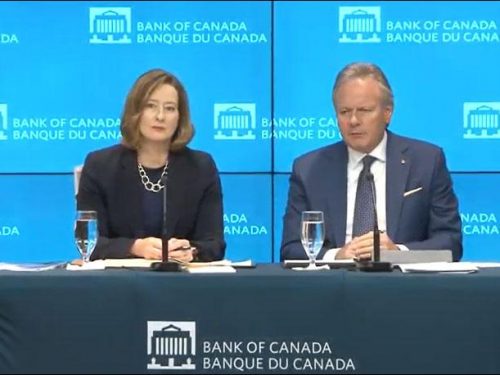