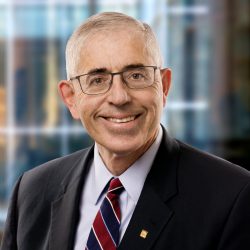 Lawrence Schembri served as Deputy Governor from 2013 until his retirement from the Bank of Canada in June 2022. In this capacity, he was one of two deputy governors responsible for overseeing the Bank’s analysis and activities promoting a stable and efficient financial system. From 2016, he supervised the Bank’s analysis of domestic economic developments. As a member of the Bank’s Governing Council, he shared responsibility for decisions related to monetary policy and financial system stability and for setting the Bank’s strategic direction.

Mr. Schembri joined the Bank in 1997 as a visiting Research Advisor in what is now the International Economic Analysis Department. In 2001, he was appointed Senior Research Director in the same department and became its Managing Director in 2005. In 2010 he was appointed Advisor to the Governor, with responsibilities for financial stability analysis and coordinating the Bank’s contribution to the Financial Stability Board.

While at the Bank, Mr. Schembri was an active researcher. His published works focused on exchange rate and monetary theory and policy in open economies, the international monetary system and financial stability. He was also active in university recruiting and sponsored the Governor’s Challenge undergraduate student competition. A champion of efforts to promote economic opportunity and inclusion for Indigenous Peoples, Mr. Schembri was a founding member of the Central Bank Network for Indigenous Inclusion.

Mr. Schembri was an assistant professor and, later, associate professor of economics at Carleton University until 2001.

The Indigenous economy in Canada: Partnering to promote

Living with limits: household behaviour in Canada in the time of COVID-19

The (Mostly) Long and Short of Potential Output

Strengthening Inflation Targeting: Review and Renewal Processes in Canada and Other Advanced Jurisdictions

Credibility, Flexibility and Renewal: The Evolution of Inflation Targeting in Canada

Canada and the IMF: Trailblazer or Prodigal Son?

Productivity, the Terms of Trade, and the Real Exchange Rate: The Balassa-Samuelson Hypothesis Revisited

Canada's Pioneering Experience with a Flexible Exchange Rate in the 1950s: (Hard) Lessons Learned for Monetary Policy in a Small Open Economy

Staff Working Paper 1999-10 Patrick Osakwe, Lawrence L. Schembri
This paper examines the impact of a collapsing exchange rate regime on output in an open economy in which shocks to capital flows and exports predominate. A sticky-price rational expectations model is used to compare the variability of output under the collapsing regime to that under alternative fixed and flexible regimes. Output is found to […]
Content Type(s): Staff research, Staff working papers Topic(s): Exchange rates JEL Code(s): F, F3, F31, F4, F41

Reinventing the Role of Central Banks in Financial Stability

The International Monetary System: An Assessment and Avenue for Reform

Bank of Canada Review - Autumn 2011 Lawrence L. Schembri, Eric Santor
The current international monetary system is in need of reform. This article first provides an assessment of the existing system, highlighting both its strengths and weaknesses. It notes that the system has not facilitated the symmetric and timely adjustment in the real exchange rate necessary to accommodate the integration of China and other emerging-market economies into the global economy. This lack of adjustment contributed to the global financial crisis and recession and, because it is forestalling the required rotation of global demand, is hindering the global recovery. The article then discusses reform of the system that would see all systemically important countries and currency areas adopt market-based and convertible floating exchange rates supported by appropriate monetary, fiscal and financial sector policy frameworks. It also examines the roles of the G-20 countries and major international financial institutions in promoting and facilitating the system’s transition.
Content Type(s): Publications, Bank of Canada Review articles Topic(s): Exchange rate regimes, International topics
March 18, 2008

Canada's Experience with a Flexible Exchange Rate in the 1950s: Valuable Lessons Learned

Bank of Canada Review - Spring 2008 Lawrence L. Schembri
Schembri studies Canada's post-World War II experience in introducing a floating exchange rate, including its effects on the Canadian economy and its influence on the development of macroeconomic theory. In particular, Canada's flexible exchange rate and high degree of capital mobility with the United States provided an unprecedented experiment for macroeconomic policy. The successes and difficulties encountered by Canadian authorities in managing monetary and fiscal policy under this regime drew the interest of researchers at the International Monetary Fund and elsewhere and had a significant impact on the development of the Mundell-Fleming model, the path-breaking innovation in modern open-economy macroeconomics.
Content Type(s): Publications, Bank of Canada Review articles Topic(s): Central bank research, Exchange rate regimes, Monetary policy framework
April 22, 2005

Borders, Common Currencies, Trade, and Welfare: What Can We Learn from the Evidence?

Bank of Canada Review - Spring 2005 John F. Helliwell, Lawrence L. Schembri
Recent evidence indicates that the intensity of economic exchange within and across borders is significantly different: linkages are much tighter within, than among, nation-states. These findings, however, do not necessarily imply that borders and separate national currencies represent significant barriers to trade that should be removed, since the evidence is also consistent with the alternative hypothesis, that domestic exchange is more efficient because domestic producers are better able to satisfy the requirements of local consumers, owing to common tastes and institutions and the existence of local information and social networks. Focusing primarily on trade linkages within and between Canada and the United States, the authors review the evidence on the extent to which national borders lessen the intensity of international economic linkages, primarily trade in goods and services, and the effects on domestic welfare. They also examine the evidence on the impact of common currencies on trade and welfare. They determine that, since the empirical models employed to date in this research cannot distinguish between alternative explanations of the evidence, it is not yet possible to draw firm conclusions for policy-making.
Content Type(s): Publications, Bank of Canada Review articles Topic(s): Exchange rate regimes, International topics, Monetary policy framework
April 20, 2005

Bank of Canada Review - Spring 2005 Lawrence L. Schembri
The Bank of Canada's 2004 research conference examined the real and financial linkages between the Canadian economy and the economies in the rest of the world. Although Canada has profited enormously from its openness to international trade in goods, services, and financial assets, many of the most significant shocks to the Canadian economy in recent years have come from abroad. For these reasons, understanding the extent and nature of the external linkages, their implications for the Canadian economy, and the process by which the Canadian economy adjusts to external shocks is of critical importance both for monetary policy and for monitoring the financial system. This article describes the purpose of the conference—to deepen economists' understanding of these important issues—and provides highlights of the papers presented in each of the five sessions, as well as summaries of the keynote lecture and the discussion of the policy panel.
Content Type(s): Publications, Bank of Canada Review articles Topic(s): Balance of payments and components, Exchange rates, International topics
November 19, 2002

Bank of Canada Review - Autumn 2002 Robert Lafrance, Lawrence L. Schembri
This article examines the concept of purchasing-power parity (PPP) and its implications for the equilibrium value of the Canadian exchange rate. PPP has two main applications, as a theory of exchange rate determination and as a means to compare living standards across countries. Concerning exchange rate determination, PPP is mainly useful as a reminder that monetary policy has no long-run impact on the real exchange rate, since the exchange rate can deviate persistently from its PPP value in response to real shocks. To compare living standards across countries, PPP exchange rates constructed by comparing the prices of national consumption baskets are used to translate per capita national incomes into a common currency. These rates are useful because they offset differences in national price levels to obtain comparable measures of purchasing power, but they are not an accurate measure of the equilibrium value of the exchange rate. The authors conclude that the current deviation of the Canadian exchange rate from the PPP rate does not imply that the exchange rate is undervalued, but that this deviation reflects the impact of persistent real factors, in particular, lower commodity prices.
Content Type(s): Publications, Bank of Canada Review articles Topic(s): Exchange rates
May 18, 2002

Foreign Takeovers and the Canadian Dollar: Evidence and Implications

Bank of Canada Review - Spring 2002 Lawrence L. Schembri
Since 1995, acquisitions of foreign firms by Canadian residents and acquisitions of Canadian firms by foreign residents have increased. Through most of this period, the dollar has depreciated, but the cumulative net balance of foreign direct investment acquisition flows has remained close to zero. The recent upward trend in bilateral acquisition flows is part of the globalization process as firms consolidate and rationalize their operations, and is not related to the value of the Canadian dollar. Standard models of international asset pricing imply that there should not be a relationship between the Canadian exchange rate and foreign takeovers of Canadian firms because an exchange rate movement does not give foreign buyers a systematic advantage over domestic buyers. Purchases of domestic firms by foreign residents are likely to be welfare-improving. Transactions between foreign and domestic residents are voluntary, and they imply that the foreign buyers expect to obtain higher profits from the firms' assets.
Content Type(s): Publications, Bank of Canada Review articles Topic(s): Exchange rates
November 15, 2001

Bank of Canada Review - Autumn 2001 Lawrence L. Schembri
This article summarizes the proceedings of an international research conference hosted by the Bank of Canada in November 2000. The conference marked the fiftieth anniversary of Canada's adoption of a flexible exchange rate, and its title recognizes the seminal contribution of Professor Milton Friedman's article "The Case for Flexible Exchange Rates." His keynote address to the conference is also summarized in the article. The conference papers re-examine many of the arguments raised by Friedman using recent developments in economic theory and econometric techniques. They investigate the experience of a wide range of industrialized and emerging-market economies. The main findings are that a strong case can be made for flexible exchange rates in economies that are large commodity exporters and that have credible low-inflation monetary policies and relatively well-developed financial systems.
Content Type(s): Publications, Bank of Canada Review articles Topic(s): Exchange rate regimes, Exchange rates
December 15, 1999

The Exchange Rate, Productivity, and the Standard of Living

Currency crises and fixed exchange rates in the 1990s: A review

Bank of Canada Review - Autumn 1998 Patrick Osakwe, Lawrence L. Schembri
Currency crises in the 1990s, especially those in emerging markets, have sharply disrupted economic activity, affecting not only the country experiencing the crisis, but also those with trade, investment, and geographic links. The authors review the theoretical literature and empirical evidence regarding these crises. They conclude that their primary cause is a fixed nominal exchange rate combined with macroeconomic imbalances, such as current account or fiscal deficits, that the market perceives as unsustainable at the prevailing real exchange rate. They also conclude that currency crises can be prevented through the adoption of sound monetary and fiscal policies, effective regulation and supervision of the financial sector, and a more flexible nominal exchange rate.
Content Type(s): Publications, Bank of Canada Review articles Topic(s): Exchange rates

Lawrence L. Schembri
The pandemic and related measures to control the spread of the virus have deeply affected Canadians and the Canadian economy. The impacts have been different across sectors and regions. The economic recovery will also vary across the country as local economies start to reopen.
Content Type(s): Publications, The Economy, Plain and Simple Topic(s): Coronavirus disease (COVID-19)

Emerging from the Shadows: Market-Based Financing in Canada