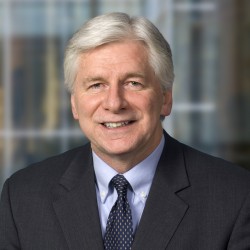 John Murray served as Deputy Governor of the Bank of Canada from January 2008 until his retirement from the Bank in April 2014. As a member of the Bank’s Governing Council, he shared responsibility for decisions with respect to monetary policy and financial system stability, and for setting the strategic direction of the Bank.

Mr. Murray joined the Bank of Canada in 1980 as a Senior Economist with the Monetary and Financial Analysis Department. In 1981, he was promoted to the position of Research Officer, and in 1982, he became Assistant Chief of the department. He served as Research Adviser in the Monetary and Financial Analysis and International departments from 1984 to 1987. In 1987, he was appointed Deputy Chief of the International Department, and in 1990, Chief. Mr. Murray became an Adviser to the Governor in January 2000.

Stepping Outside: Analyzing the Canadian Economy from an International Perspective

Price Puzzles and the Exchange Rate

The Great Frustration: Hesitant Steps Toward Global Growth and Rebalancing

With a Little Help from Your Friends: The Virtues of Global Economic Coordination

The Turning Black Tide: Energy Prices and the Canadian Dollar

Staff Working Paper 1999-12 John Murray
This paper explores the arguments for and against a common currency for Canada and the United States and attempts to determine whether such an arrangement would offer any significant advantages for Canada compared with the present flexible exchange rate system. The paper first reviews the theoretical arguments advanced in the economics literature in support of fixed and flexible currency arrangements. A discussion of Canada's past experience with the two exchange rate systems follows, after which there is a survey of the empirical evidence published on Canada's current and prospective suitability for some form of fixed currency arrangement with the United States. The final section of the paper examines critically a number of concerns raised about the behaviour of the current flexible exchange rate system.
Content Type(s): Staff research, Staff working papers Topic(s): Exchange rates JEL Code(s): F, F3, F31

Dollarization in Canada: The Buck Stops There

Technical Report No. 88 John Murray, Mark Zelmer, Zahir Antia
This paper examines the behaviour of the Canadian dollar from 1997 to 1999 to see if there is any evidence of excess volatility or significant overshooting. A small econometric model of the exchange rate, based on market fundamentals, is presented and used to make tentative judgments about the extent to which the currency might have been systematically over- or undervalued.
Content Type(s): Staff research, Technical reports Topic(s): Exchange rate regimes, Exchange rates JEL Code(s): F, F3, F31

Excess Volatility and Speculative Bubbles in the Canadian Dollar: Real or Imagined?

Measuring the Profitability and Effectiveness of Foreign Exchange Market Intervention: Some Canadian Evidence

Technical Report No. 53 John Murray, Mark Zelmer, Shane Williamson
When the major industrial countries decided to move to a system of managed flexible exchange rates following the collapse of the Bretton Woods system, many observers thought that this would reduce, if not eliminate, the need for official foreign exchange market intervention. During the past fifteen years, however, intervention in most countries, including Canada, has […]
Content Type(s): Staff research, Technical reports Topic(s): Exchange rates JEL Code(s): F, F3, F31, G, G1, G14

A VAR Analysis of Economic Interdependence: Canada, the United States, and the Rest of the World

Technical Report No. 46 John Kuszczak, John Murray
The authors use vector autoregression (VAR) modelling techniques to examine the response of the domestic economy to foreign influences and to quantify some of the concepts and relationships relating to economic interdependence. Particular attention is given to the dynamic behaviour and interactions of the U.S. and Canadian economies over the past twenty years. Extensive empirical […]
Content Type(s): Staff research, Technical reports Topic(s): International topics JEL Code(s): F, F1, F15, F4, F41

Monetary Policy Decision Making at the Bank of Canada

Has Exchange Rate Pass-Through Really Declined? Some Recent Insights from the Literature

Bank of Canada Review - Winter 2007-2008 John Murray
The inflation targeting framework that Canada introduced in 1991 has played a significant role in the exceptional economic performance that the country has experienced in recent years. Understanding the factors that have contributed to the success of the current inflation-targeting framework, and investigating the various ways in which it might be improved in the future, are an important part of the Bank of Canada's medium-term research program.
Content Type(s): Publications, Bank of Canada Review articles
August 21, 2003

Dollarization in Canada: An Update

Bank of Canada Review - Summer 2003 John Murray, James Powell, Louis-Robert Lafleur
The authors describe a special survey of the payment and financial-reporting practices of Canadian firms conducted by the Bank of Canada's regional offices to determine if the U.S. dollar has started to displace the Canadian dollar as a preferred unit of account. A cross-section of firms was asked what currency (or currencies) they used: (i) for quoting sales to Canadian customers, (ii) for quoting prices to foreigners, (iii) for reporting their financial results, and (iv) for quoting salaries and wages. The survey results reported here extend some earlier results reported in a previous Review article by Murray and Powell. The data indicate that, despite the dominance of the U.S. dollar in world trade and as an international standard of value, use of the U.S. dollar in Canada is very limited. The vast majority of Canadian firms price their products and keep their financial statements in Canadian dollars, and very few workers in Canada have their salaries paid in a foreign currency. The Canadian dollar is still strongly preferred for most pricing and financial-reporting activities in Canada, and there is very little evidence of "dollarization."
Content Type(s): Publications, Bank of Canada Review articles Topic(s): Exchange rate regimes
December 21, 2002

Bank of Canada Review - Autumn 2002 John Murray, James Powell
The sharp depreciation of the Canadian dollar and the successful launch of the euro have sparked a lively debate in Canada about the possible benefits of formally adopting the U.S. dollar as our national currency. Some observers have suggested that this debate is largely irrelevant, since Canada is already highly "dollarized." Canadian businesses and households, they assert, often use the U.S. dollar to perform standard money functions in preference to their own currency. Very little evidence has been provided, however, to support these claims. The authors review the available data with a view to drawing some tentative conclusions about the extent to which Canada has already been informally dollarized. The evidence suggests that many of the concerns that have been expressed about the imminent demise of the Canadian dollar have been misplaced. The Canadian dollar continues to be used as the principal unit of account, medium of exchange, and store of value within our borders. Moreover, there is no indication that dollarization is likely to take hold in the foreseeable future. Indeed, in many respects, the Canadian economy is less dollarized now than it was 20 years ago.
Content Type(s): Publications, Bank of Canada Review articles Topic(s): Exchange rate regimes