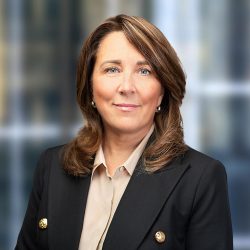 Carolyn Rogers was appointed Senior Deputy Governor of the Bank of Canada, effective December 15, 2021, for a seven-year term.

At the time of her appointment as Senior Deputy Governor, Ms. Rogers was Secretary General of the Basel Committee on Banking Supervision. From 2016 to 2019, Ms. Rogers served as Assistant Superintendent, Regulation Sector at the Office of the Superintendent of Financial Institutions (OSFI), where she was responsible for policy-related functions, including capital, accounting and legislation.

Before joining OSFI, Ms. Rogers served from 2010 to 2016 as Superintendent and Chief Executive Officer of the integrated financial sector regulator of British Columbia, the Financial Institutions Commission. During that time she served as Vice-Chair and Chair of the Canadian Council of Insurance Regulators. She is also a founding member and past Chair of the Credit Union Prudential Supervisors Association.

Before entering the provincial public service, Ms. Rogers worked in various roles in the private sector, including as chief financial officer and chief executive officer of a private company. She also worked in the financial services sector at several credit union organizations and a major bank.

Born in Winnipeg, Manitoba, Ms. Rogers is a Chartered Professional Accountant, and holds a bachelor of arts from Brandon University and a master of business administration from Queen’s University.

Financial stability in times of uncertainty

The Bank of Canada: A matter of trust