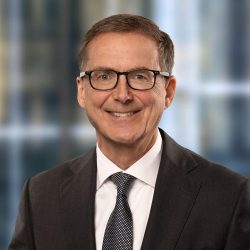 Mr. Macklem first joined the Bank in 1984 and returned in 1989. He occupied increasingly senior positions in what is now the Canadian Economic Analysis Department until his appointment as Chief in January 2000. He was appointed Advisor to the Governor in August 2003 and made a Deputy Governor in December 2004.

During the 2008–09 global financial crisis, Mr. Macklem was Associate Deputy Minister at the Department of Finance Canada and represented Canada at the G7, G20 and Financial Stability Board. Mr. Macklem returned to the Bank in July 2010 when he was appointed Senior Deputy Governor.

In July 2014, Mr. Macklem assumed the role of Dean of the Rotman School of Management at the University of Toronto. During his time at Rotman, he frequently spoke about the global financial system, risk management and public policy. Before becoming Governor, Mr. Macklem served as a director of the Bank of Nova Scotia and chair of its board risk committee. He was also chair of Ontario’s Panel on Economic Growth and Prosperity, the federal Expert Panel on Sustainable Finance and the Global Risk Institute in Financial Services.

Opening Statement before the Standing Senate Committee on Banking, Trade and the Economy

What’s happening to inflation and why it matters

Opening Statement before the Standing Senate Committee on Banking, Trade and Commerce

Staff Working Paper 1997-14 Robert Amano, Tiff Macklem
The menu-cost models of price adjustment developed by Ball and Mankiw (1994;1995) predict that short-run movements in inflation should be positively related to the skewness and the variance of the distribution of disaggregated relative-price shocks in each period. We test these predictions on Canadian data using the distribution of changes in disaggregated producer prices to measure the skewness and standard deviation of relative-price shocks.
Content Type(s): Staff research, Staff working papers Topic(s): Inflation and prices, Monetary policy framework JEL Code(s): C, C5, C52, E, E3, E31

Government Debt and Deficits In Canada: A Macro Simulation Analysis

Staff Working Paper 1995-4 Tiff Macklem, David Rose, Robert Tetlow
This paper examines the macroeconomic implications of rising government debt in Canada and the short-run costs and long-run benefits of stemming the rise. The discussion begins with an evaluation of the long-run consequences of increasing government indebtedness, first based on the simple arithmetic of the government's long-run budget constraint, and then based on simulations of […]
Content Type(s): Staff research, Staff working papers Topic(s): Fiscal policy

Wealth, Disposable Income and Consumption: Some Evidence for Canada

Information and Analysis for Monetary Policy: Coming to a Decision

Bank of Canada Review - Summer 2002 Tiff Macklem
This article outlines one of the Bank's key approaches to dealing with the uncertainty that surrounds decisions on monetary policy: the consideration of a wide range of information from a variety of sources. More specifically, it describes the information and analysis that the monetary policy decision-makers—the Governing Council of the Bank of Canada—receive in the two or three weeks leading up to a decision on the setting of the policy rate—the target overnight interest rate. The article also describes how the Governing Council reaches this decision.
Content Type(s): Publications, Bank of Canada Review articles Topic(s): Monetary and financial indicators, Monetary policy framework, Monetary policy implementation
November 18, 2001

A New Measure of Core Inflation

Bank of Canada Review - Autumn 2001 Tiff Macklem
While the Bank of Canada's inflation-control target is specified in terms of the rate of increase in the total consumer price index, the Bank uses a measure of trend or "core" inflation as a short-term guide for its monetary policy actions. When the inflation targets were renewed in May 2001, the Bank announced that it was adopting a new measure of core inflation. This measure excludes the eight most volatile components of the CPI and adjusts the remaining components for the effect of changes in indirect taxes. In this article, the author discusses the definition of the new measure of core inflation and describes some of its advantages relative to the previous measure. He notes that the new measure has a firmer statistical basis, has a better correspondence with economic theory, and does a better job of predicting future changes in overall inflation. While the new measure has these advantages, the Bank will continue to monitor a broad range of indicators when assessing the likely future path for inflation.
Content Type(s): Publications, Bank of Canada Review articles Topic(s): Inflation targets
December 11, 1997

Bank of Canada Review - Winter 1997-1998 Tiff Macklem
This article summarizes the proceedings of a conference hosted by the Bank of Canada in May 1997. The first conference held by the Bank on this subject was in 1993, two years after the introduction of inflation targeting in Canada. The 1997 conference revisited many of the analytic issues related to price stability that had been examined at the first conference, while also considering several additional questions. This time, with the extension of inflation-control targets beyond 1998 under consideration, particular emphasis was placed on the role and design of those targets. The conference also featured a round-table discussion among practitioners of monetary policy in three inflation-targeting countries—New Zealand, Sweden, and the United Kingdom. Their remarks, which focussed on the experience with inflation targets, bring out very clearly the common challenges facing monetary policymakers in open economies.
Content Type(s): Publications, Bank of Canada Review articles Topic(s): Monetary policy framework
May 13, 1997

Bank of Canada Review - Spring 1997 Tiff Macklem
The short-run Phillips curve describes a positive short-run relationship between the level of economic activity and inflation. When the level of demand in the economy as a whole runs ahead of the level of output that the economy can supply in the short run, price pressures increase and inflation rises. This article reviews the origins of the short-run Phillips curve with particular emphasis on the long-standing idea that the shape of this curve may be non-linear, with inflation becoming more sensitive to changes in output when the cycle of economic activity is high than when it is low. This type of non-linearity in the short-run Phillips curve, which is typically motivated by the effects of capacity constraints that limit the ability of the economy to expand in the short run, has recently attracted renewed attention. The article surveys recent research that finds some evidence of this type of non-linearity in the Phillips curve in Canada and considers the potential implications for monetary policy.
Content Type(s): Publications, Bank of Canada Review articles Topic(s): Inflation and prices, Monetary policy transmission, Potential output
December 8, 1994

Some macroeconomic implications of rising levels of government debt

Bank of Canada Review - Winter 1994-1995 Tiff Macklem
The level of government debt in Canada relative to gross domestic product has risen steadily since the mid-1970s. Canada has not been alone in experiencing rising government indebtedness, but in comparison to other countries, Canada's debt load is now distinctly on the high side. The author reviews some of the effects of rising government debt levels on macroeconomic performance and provides some calculations aimed at illustrating their possible long-run impact on the Canadian economy. His analysis, which is based on a model of the Canadian economy used at the Bank of Canada, suggests that higher levels of government debt reduce both the level of output and the share of output that is available for domestic consumption. The central policy implication is that there are substantial benefits to halting the rise in government debt and thus preventing further erosion of consumption opportunities.
Content Type(s): Publications, Bank of Canada Review articles Topic(s): Fiscal policy, Recent economic and financial developments