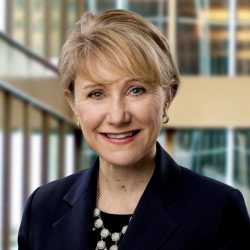 Jane Voll was appointed Regional Director (Economics) at the Bank’s Regional Office for Ontario in September 2008. In this capacity, she directs research and analysis on economic and sectoral developments in the region, including overseeing the Bank’s Business Outlook Survey in that province. She also plays a major role in the Office’s activities in communicating the Bank’s messages to a variety of external audiences and promoting an exchange of views on the economy and monetary policy.

Originally from Kitchener­–Waterloo, Ms. Voll is a graduate of the Senior Executive Fellows program at the Kennedy School of Government at Harvard University. She holds a graduate degree in Economics from the University of Toronto and was an alumni gold medallist in the Honours Co-op Program in Economics, Finance and Accounting at Wilfrid Laurier University in Waterloo. Ms. Voll is a Chartered Director (C. Dir), certified by the Conference Board of Canada and the DeGroote School of Business at McMaster University, and a Chartered Professional Accountant (CPA, CMA).

Before joining the Bank, Ms. Voll was at the Insurance Bureau of Canada, where she occupied increasingly senior positions from 1993 until the time of her appointment as Chief Economist and Vice-President, Policy, in 2003. She has also worked as an economist for the Ontario Ministry of Finance, as a university economics instructor, and as Advisor, Research and Strategic Planning, with the Institute for Catastrophic Loss Reduction.

Ms. Voll has served on the boards of a number of professional, academic and social services organizations, including the Traffic Injury Research Foundation in Ottawa, the Risk Studies Centre at the University of Calgary’s Haskayne School of Business, the Toronto Association for Business and Economics, Runnymede Healthcare Centre in Toronto and Women’s Habitat in Toronto.

Why Do Canadian Firms Invest and Operate Abroad? Implications for Canadian Exports

Are Counterparty Arrangements in Reinsurance a Threat to Financial Stability?