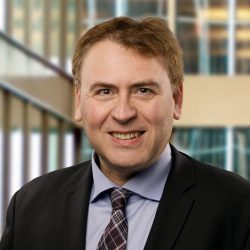 James (Jim) C. MacGee was appointed Managing Director of Economic and Financial Research (EFR), effective January 2, 2019. In this role, Mr. MacGee works with the managing directors, research directors and relevant teams within the Bank to develop and execute leading-edge research to support the Bank’s policy functions.

Previously, Mr. MacGee was Associate Professor of Economics at Western University, where his research interests included consumer credit and macroprudential policy, monetary economics, the adoption of technology, and international trade. He was the recipient of the 2013 Bank of Canada Governor’s Award for his research on consumer bankruptcy. Mr. MacGee is also a past director of the Western Master of Financial Economics program. As an active supervisor of PhD students, Mr. MacGee uses his coaching and mentoring skills to assist talented young economists and financial sector specialists in their development. He was a visiting scholar at the Federal Reserve Bank of Cleveland in 2008–09.