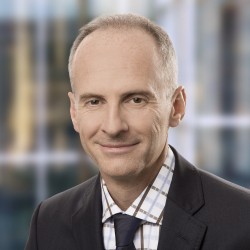 Sylvain Leduc served as Deputy Governor of the Bank of Canada from May 2016 until July 2018. In this capacity, he was one of two deputy governors responsible for overseeing the Bank’s analysis and activities in promoting a stable and efficient financial system. As a member of the Bank’s Governing Council, he shared responsibility for decisions with respect to monetary policy and financial system stability and for setting the strategic direction of the Bank.