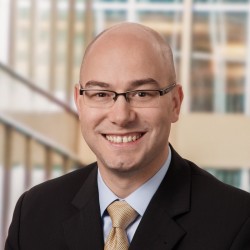 Russell Barnett was appointed Deputy Managing Director of the Bank’s Financial Stability Department (FSD), effective November 1, 2021. In this capacity, he contributes to the strategic direction and management of the department and oversees the Bank’s analyses and research on issues related to the financial sector in Canada and abroad as well as the assessment of risks to financial system stability and the oversight of systemically important payment clearing and settlement systems.

Prior to this, Mr. Barnett was Deputy Managing Director of the Bank’s Canadian Economic Analysis Department (CEA), where he oversaw the Bank’s analysis of the Canadian economy and its research on monetary policy. He managed the Bank’s conjunctural analysis teams, the production of the staff economic outlook and the model development efforts of the department. He also actively contributed to the Bank’s communication of the Monetary Policy Report by presenting to a variety of audiences. In addition, he conducted analysis and research primarily focused on labour markets, economic forecasting, international trade and monetary policy.

Mr. Barnett began his career at the Department of Finance before joining the Bank in 2005 as an economist in the Canadian Projection and Model Development Division. In this role, he developed the Bank’s modelling framework for estimating trend labour input that is still used in the Bank’s annual reassessment of potential output in Canada. After spending 3 years working at the Office of the Parliamentary Budget Officer as Director, Economic and Fiscal Analysis, he returned to the Bank in December 2011 as the Director of the United States Division in the International Economic Analysis Department. He subsequently became Policy Advisor in the same department and later Research Advisor in the Canadian Economic Analysis Department. In both these roles, he led the respective departments’ contributions to the Bank of Canada’s Monetary Policy Report (MPR) and contributed to several research initiatives including the development of the Bank’s Canadian Effective Exchange Rates.

Born in Ottawa, Ontario, Mr. Barnett holds an M.A. in economics from the University of Victoria.

A Structural Interpretation of the Recent Weakness in Business Investment

Assessing the Impact of Demand Shocks on the US Term Premium

A New Measure of the Canadian Effective Exchange Rate

Bank of Canada Review - Summer 2013 Russell Barnett, Pierre Guérin
The Bank of Canada uses several short-term forecasting models for the monitoring of key foreign economies - the United States, the euro area, Japan and China. The design of the forecasting models used for each region is influenced by the level of detail required, as well as the timeliness and volatility of data. Forecasts from different models are typically combined to mitigate model uncertainty, and judgment is applied to the model forecasts to incorporate information that is not directly reflected in the most recent indicators.
Content Type(s): Publications, Bank of Canada Review articles Topic(s): Business fluctuations and cycles JEL Code(s): E, E3, E37
June 17, 2007

Bank of Canada Review - Summer 2007 Russell Barnett
While demographic change has been an ongoing process in Canada, labour market implications of an aging population will become more acute in coming years. This article discusses the anticipated slowing in the growth of trend labour input over the coming decades with the aging of the baby boomers, declining fertility rates, and the stabilization of the labour force attachment of women. As the pool of labour shrinks, employers and governments will be looking for ways to address barriers to continued labour force participation and firms will have a greater incentive to find ways of improving labour productivity.
Content Type(s): Publications, Bank of Canada Review articles Topic(s): Economic models, Labour markets, Potential output

Russell Barnett, José Dorich
Ever wonder how your wages are determined? You’re not the only one who cares about your wages. At the Bank of Canada, we care about them a lot too.
Content Type(s): Publications, The Economy, Plain and Simple Topic(s): Business fluctuations and cycles, Firm dynamics, Labour markets, Productivity