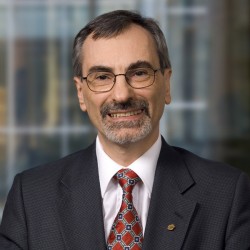 Pierre Duguay served as a Deputy Governor of the Bank of Canada from January 2000 until his retirement from the Bank in July 2010. As a member of the Bank’s Governing Council, he shared responsibility for decisions with respect to monetary policy and financial system stability, and for setting the strategic direction of the Bank.

Technical Report No. 47 Pierre Duguay, Yves Rabeau
An increase in a government deficit can have two effects: short-term stimulation of aggregate demand and employment, and long-term contraction of potential output. In this paper, these effects are illustrated using a dynamic, macroeconomic simulation model. The model is not a forecasting tool; it is intended to bridge the gap between Keynesian and supply-side economics […]
Content Type(s): Staff research, Technical reports Topic(s): Economic models, Fiscal policy JEL Code(s): H, H6, H60