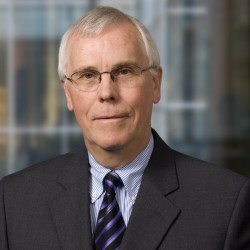 Paul Jenkins served as Senior Deputy Governor of the Bank of Canada from April 2003 until his retirement from the Bank in April 2010. In this capacity, he served as the Bank’s Chief Operating Officer and, along with the Governor, as a member of the Board of Directors of the Bank. Mr. Jenkins’ duties included acting for the Governor, overseeing strategic planning and coordinating all of the Bank’s operations. As a member of the Bank's Governing Council, he shared responsibility for decisions with respect to monetary policy and financial system stability, and for setting the strategic direction of the Bank.

Remarks Paul Jenkins Economic Club of Canada Toronto, Ontario
John Maynard Keynes said the objective of "analysis is … to provide ourselves with an organized and orderly method of thinking out particular problems .… This is the nature of economic thinking."
Content Type(s): Press, Speeches and appearances, Remarks
October 8, 2009

Remarks Paul Jenkins Vancouver Board of Trade Vancouver, British Columbia
Indeed, the global financial crisis of the past two years has presented unique, stressful challenges that have forced us all to assess what has worked well and what needs to change. Today, I would like to review some of the critical thinking around these issues, primarily from the perspective of our work at the Bank of Canada.
Content Type(s): Press, Speeches and appearances, Remarks
July 10, 2009

The Global & Canadian Economies: The Outlook through 2010

Remarks Paul Jenkins London Chamber of Commerce London, Ontario
As is the case for so many cities and regions in Canada, London's economy and that of southwestern Ontario are directly affected by changes in the global economy. And, as with so many things in life, the better we understand the forces of change, the better equipped we are to deal with them.
Content Type(s): Press, Speeches and appearances, Remarks
March 12, 2008

Opening Statement before the Standing Senate Committee on Banking, Trade and Commerce

Opening statement Paul Jenkins Standing Senate Committee on Banking, Trade and Commerce
Let me start by saying that the issue of internal trade barriers is critically important, and I'm very pleased, Mr. Chairman, that your committee is examining it. We have reviewed previous submissions to this committee, and you will see that our focus will be slightly different.
Content Type(s): Press, Speeches and appearances, Opening statements
January 30, 2008

Opening Statement before the House of Commons Standing Committee on Industry, Science and Technology

Opening statement Paul Jenkins House of Commons Standing Committee on Industry, Science and Technology
To begin, as a little background I would like to quickly review the framework within which we conduct Canada's monetary policy. The Bank of Canada Act calls on us to mitigate "fluctuations in the general level of production, trade, prices and employment, so far as may be possible within the scope of monetary action, and generally to promote the economic and financial welfare of Canada."
Content Type(s): Press, Speeches and appearances, Opening statements
November 14, 2007

Canada & Ontario in the Global Economy: Challenges in a Changing World

Remarks Paul Jenkins Canadian Association of New York New York, New York
In recent months, much has been said, and written, about developments in financial markets. The turbulence in global credit markets, which had its roots in developments in the market for subprime mortgages here in the United States, has been a focal point of attention for market participants and policy-makers around the world.
Content Type(s): Press, Speeches and appearances, Remarks

Communication: A Vital Tool in the Implementation of Monetary Policy

Bank of Canada Review - Summer 2002 Paul Jenkins, David Longworth
Central banks must cope with considerable uncertainty about what will happen in the economy when formulating monetary policy. This article describes the different types of uncertainty that arise and looks at examples of uncertainty that the Bank has recently encountered. It then reviews the strategies employed by the Bank to deal with this problem. The other articles in this special issue focus on three of these major strategies.
Content Type(s): Publications, Bank of Canada Review articles Topic(s): Monetary policy and uncertainty, Monetary policy framework
December 16, 1999

Economic and Financial Developments to 16 February 2000: An Update to the Monetary Policy Report

Bank of Canada Review - Winter 1999–2000 Tim Noël, Sheryl Kennedy, Gordon Thiessen, Malcolm Knight, Pierre Duguay, Paul Jenkins, Charles Freedman
Highlights * The pace of economic activity in the United States remains strong, exceeding earlier expectations. * With the stronger momentum of external demand, the Bank now expects Canada's real GDP growth in 2000 to be in the upper half of the 2.75 to 3.75 per cent range projected in the last Monetary Policy Report. * Core inflation was below expectations in November, partly because of price discounting on certain semi-durables. * The Bank expects core inflation to increase to 2 per cent in the first quarter of 2000. * Because of higher energy prices, the rate of increase in total CPI is expected to rise to close to 3 per cent early in the year. * Developments during the last three months underscore the risks to Canada's economic outlook highlighted in the last Report : stronger momentum of demand for Canadian output from both domestic and external sources and potential inflationary pressures in the United States. Information received since 14 January, when the update to our November Monetary Policy Report was completed, continues to point to a strengthening outlook for the world economy and for Canada. In the United States, real GDP again exceeded expectations—rising at an annual rate of 5.8 per cent in the fourth quarter. While some price and cost pressures are evident in the United States, strong productivity growth has thus far held unit labour costs down. Because of the rapid expansion of demand above the growth of potential capacity, however, and the associated inflation risks, the Federal Reserve increased its federal funds rate by 25 basis points to 5.75 per cent on 2 February. Although trend inflation remains low in the industrial countries, a number of other major central banks have also raised their policy rates in the last couple of weeks because of concern about future inflation pressures, given strengthening demand. The buoyancy of external demand, particularly that coming from the United States, continues to show in our latest merchandise trade numbers. Export growth in November remained strong, with the overall trade balance in large surplus. World prices for our key primary commodities also continue to firm in response to rising global demand. On the domestic side, the latest information on demand and production points to continued robustness. Real GDP (at factor cost) rose 0.6 per cent (4.6 per cent year-over-year) in November, and employment continued to grow strongly through year-end and into January. Other indicators, including the latest data on the monetary aggregates, support this strong economic picture. The Bank now expects real GDP growth in 2000 to be near the top of the 2.75 to 3.75 per cent range projected in November. Our core measure of inflation was 1.6 per cent (year-over-year) in December, slightly below expectations, partly because of temporary discounts on certain items. Core inflation is still expected to move up to the midpoint of the Bank's 1 to 3 per cent target range in the first quarter. Over the same period, the total CPI will likely rise to close to 3 per cent because of the recent sharp step-up in energy prices but is still expected to come down towards the core rate during the course of 2000 as energy prices moderate. The Bank of Canada raised its Bank Rate by 25 basis points to 5.25 per cent on 3 February. The factors behind this decision included the strong momentum of demand in Canada from both external and domestic sources, the importance of approaching full capacity in a prudent way, and the risk of a spillover of potential inflation pressures from the United States.
Content Type(s): Publications, Bank of Canada Review articles Topic(s): Recent economic and financial developments