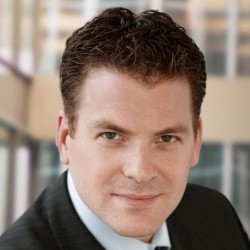 Alexander Fritsche was appointed Regional Director (Economics) at the Bank's Regional Office for the Prairie Provinces, Nunavut, and the Northwest Territories in June 2009. In this capacity, he directs research and analysis on economic and sectoral developments in the region, including overseeing the Bank's Business Outlook Survey in the region. He also plays a major role in the Office's activities in communicating the Bank's messages to a variety of external audiences and promoting an exchange of views on the economy and monetary policy.

Originally from Lahr, Germany, Mr. Fritsche holds an honours Bachelor of Arts degree in economics (1998), as well as a Master of Arts degree in economics (1999) from the University of Western Ontario. His current research interests include North American energy markets, regional economic forecasts, and the use of the Business Outlook Survey in macroeconomic forecasting.

Mr. Fritsche joined the Bank in January 2009 as a Senior Economist in the Calgary Regional Office. Before joining the Bank, Mr. Fritsche worked at the Conference Board of Canada, where he held a variety of positions in the Economic Forecasting and Analysis department, most recently as Senior Economist. He specialized in regional and industry forecasts, economic impact studies, and model building, as well as public affairs.

Extending the Labour Market Indicator to the Canadian Provinces