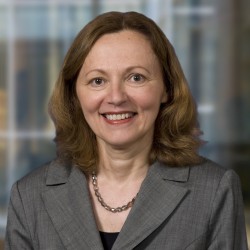 Agathe Côté served as Deputy Governor of the Bank of Canada from July 2010 until her retirement from the Bank in February 2016. As a member of the Bank’s Governing Council, she shared responsibility for decisions with respect to monetary policy and financial system stability, and for setting the strategic direction of the Bank.

Ms. Côté joined the Bank in 1982 as an economist in the International Department and, later, in the Department of Monetary and Financial Analysis. After assuming a series of positions of increasing responsibility, Ms. Côté was appointed Deputy Chief of the Department of Monetary and Financial Analysis in 2000 and, in 2001, Deputy Chief of the Financial Markets Department. From 2003 until 2008, she was Chief of the Bank’s Research Department (now Canadian Economic Analysis). In 2008, Ms. Côté was appointed Advisor to the Governor, with responsibilities in the area of domestic and international monetary policy issues, and Secretary to the Governing Council for Monetary Policy. Ms. Côté has also been a member of Statistics Canada’s Advisory Committee on National Accounts.

Staff Discussion Paper 2007-8 Agathe Côté
In November 2006, the Bank of Canada announced its intention to lead a concerted research program over the next few years on the type of monetary policy framework that would best contribute to the economic well-being of Canadians in the decades ahead. The research will focus on two broad questions: whether economic welfare might be […]
Content Type(s): Staff research, Staff discussion papers Topic(s): Monetary policy framework JEL Code(s): E, E5, E52, E58

Staff Working Paper 1994-5 Agathe Côté
This paper provides an extensive survey of the literature on exchange rate volatility and trade, examining both the theory that underlies the work in this area and the results of empirical studies published since 1988.
Content Type(s): Staff research, Staff working papers Topic(s): Exchange rates

Technical Report No. 44 Francesco Caramazza, Kevin Clinton, Agathe Côté, David Longworth
This study examines different aspects of the international integration of capital markets. In particular, it attempts to determine whether the changes in controls and regulatory policies that have occurred in the past decade have been associated with a greater degree of market integration.
Content Type(s): Staff research, Technical reports Topic(s): Balance of payments and components, Financial markets JEL Code(s): F, F2, F20, G, G1, G11, G15