Good morning. Governor Poloz and I are pleased to be here to talk about today’s interest rate announcement and our Monetary Policy Report (MPR). Before we turn to your questions, let me take a couple of minutes to give you an idea of the most important issues that came up during Governing Council’s discussions.

We started by noting some very positive developments. The Canadian economy continues to operate near its capacity, and growth is relatively broad-based across sectors and regions. Meanwhile, inflation is close to our target. What stands out is that, even with today’s increase in the policy rate to 1.75 per cent, monetary policy remains stimulative. In fact, the policy rate today is still negative in real terms; that is, once you adjust for inflation.

Given this context, it is natural that our discussion centred on the main factors driving economic activity and inflation over our projection horizon, and the appropriate pace for returning the policy rate to a neutral stance. Let me remind you that our estimate of neutral is in a range—currently 2 1/2 to 3 1/2 per cent. It is a range rather than a point estimate because the neutral rate is unobservable and can change over time.

Let me talk about our assessment of inflation developments. Inflation was running near the upper end of our 1 to 3 per cent target range in July and August, a little higher than we had expected in our July MPR. As we said at our last interest rate announcement in September, the staff assessment was that most of this surprise came from one component of the consumer price index: airfares. They judged that this component would be volatile over the coming months because of methodological changes by Statistics Canada. Staff were right.  The most recent data, released just last Friday, show that inflation fell back to 2.2 per cent in September, due in large part to a reversal of the airfare component. We could see further volatility from this component in coming months.

Importantly, our core measures of inflation remain firmly around 2 per cent. This is consistent with an economy that is operating at capacity. This episode shows just how critical it is to distinguish between the volatile elements of inflation and more persistent, underlying pressures.

Labour markets are so far showing little signs of wage pressures. Even with the unemployment rate near its lowest point in 40 years, underlying wage growth is running at around 2.3 per cent. This is a backward-looking indicator, and we project wage growth to pick up in the year ahead. Companies that we spoke to in our autumn Business Outlook Survey (BOS) expect wage gains to pick up over the coming quarters. They also told us that capacity pressures remain elevated and that labour shortages are increasing.

Governing Council spent a considerable amount of time discussing the implications of the recent US–Mexico–Canada trade agreement (USMCA). The USMCA is good news because it will reduce an important source of uncertainty that has been holding back business investment. Remember that we have been marking down our investment outlook because of this uncertainty. We know from our latest BOS, which was completed before the agreement was reached, that business investment plans were already quite positive. Firms told us they were looking to increase capacity and productivity to take advantage of a strong US economy. So, given the agreement, we have reversed some of that mark down of investment. To be prudent, we did not remove all of it, because we want to see how firms actually adjust their investment plans. This prudence is also because we know that competiveness challenges are also weighing on investment.

The approval of the LNG project on the West Coast adds to the good economic news, although its impact is somewhat offset by lower commodity prices. Overall, the projected investment profile is higher than it was in July, increasing both actual growth and the economy’s potential to expand in a non-inflationary way.

However, the protectionist trade actions, particularly those involving the United States and China, were also top of mind for us as they are still weighing on the global outlook. We have incorporated in our forecast the expected effects of tariffs imposed to date, as well as the dampening effects on confidence from threats of future measures. All told, we estimate that this amounts to a drag on the global economy of 0.3 per cent by the end of 2020. That is a big cost – it adds up to more than US$200 billion.

This represents a two-sided risk for Canadian monetary policy. There is a possibility that the United States and China find a path to ease or resolve this trade conflict. This would be positive for global trade and investment, and for Canada. However, the conflict could worsen, jeopardizing important global value chains.  This would surely reduce long-term growth and prosperity globally, although the overall implications for inflation would be uncertain.

Closer to home, Governing Council has been assessing how people are adapting to both higher interest rates and the changes to mortgage underwriting guidelines implemented earlier this year. We have seen that households are adjusting their budgets largely as expected. We understand that this can be difficult, particularly for those who are highly indebted. At the same time, employment and incomes continue to grow, which can help to cushion the adjustment process. Further, the quality of new debt is improving and housing activity is moderating to a more sustainable level. All of this is making the economy more resilient, and reduces the chances of painful outcomes for many people further down the road. The rule changes also appear to have helped take the wind out of the sails of speculators in some markets, which reduces the pressure on housing affordability. Overall, while financial system vulnerabilities are still elevated, the fact that they have stabilized and edged down in a number of respects is positive.

There is an updated analysis of these household issues in Box 4. More detail will be published about the effects of the underwriting guidelines on borrowing on the Financial System Hub that we will launch in a couple of weeks. The Hub is designed to be a place on our website where we can post our analysis of current financial system vulnerabilities and risks in a manner that is accessible to a wide audience.

Given all these factors, Governing Council agrees that the policy interest rate will need to rise to a neutral stance in order to achieve the inflation target. You may have noticed that we have not used the word “gradual” to describe the pace of policy adjustments. This is to avoid the impression that we are following a preordained, mechanical policy path. The appropriate pace for interest rate increases will depend on Governing Council’s assessment at each fixed announcement date of how the outlook for inflation and related risks are evolving. In particular, Governing Council will continue to take into account how the economy is adjusting to higher interest rates, given the elevated level of household debt. While the focus of many commentators tends to be on the downside risks, it is also possible that strong consumer confidence builds on solid job and income growth, and leads to greater-than-expected consumption. We will also pay close attention to global trade policy developments and their implications for the inflation outlook. Again, we need to bear in mind that this risk is two-sided.

With that, Governor Poloz and I would be happy to take your questions.

The Bank projects that the Canadian economy will continue to grow in line with its potential through 2020.

Media Relations Ottawa, Ontario
The Bank of Canada today increased its target for the overnight rate to 1 ¾ per cent. The Bank Rate is correspondingly 2 per cent and the deposit rate is 1 ½ per cent.
Content Type(s): Press, Press releases
October 24, 2018 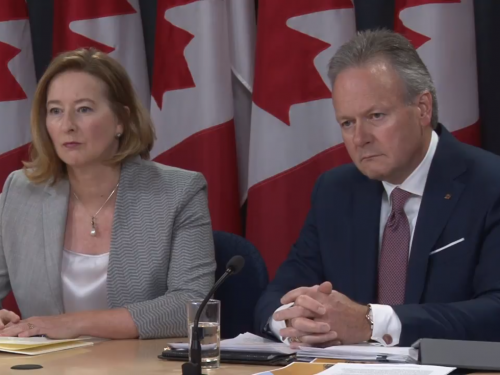