The decline in the global economy’s potential to grow, and the lower interest rates that come with it, pose risks for financial stability, Bank of Canada Senior Deputy Governor Carolyn Wilkins said today. Those risks can be mitigated through deliberate efforts from the private sector and policy-makers.

“While we typically link financial stability risks to unsustainably high growth, slower growth and lower returns can also add to vulnerabilities in the financial system,” Senior Deputy Governor Wilkins said in a speech to the Official Monetary and Financial Institutions Forum in London, UK.

Economies around the world face the prospect of sluggish growth because the two components driving potential output—labour supply and productivity—are rising more slowly than in the past, she said. The Bank of Canada estimates that global potential GDP growth declined from a peak of about 5 per cent in 2005 to just over 3 per cent this year. This represents about US$1 1/2 trillion in foregone global output for 2016 alone.

“Natural by-products of slower potential growth are not only weaker corporate profits and dividends, but also a lower average rate of return on investments,” Senior Deputy Governor Wilkins said. To gauge this effect, economists estimate the neutral rate (the interest rate needed to balance savings and investment when the economy is operating at potential), which has fallen in Canada to 1 1/4 per cent today, from 3 per cent in the early 2000s. With the policy rate currently at 50 basis points, she noted that monetary policy in Canada remains quite stimulative, although less so than it would have been a decade ago when the neutral rate was higher.

Mitigating these risks will require effort, Senior Deputy Governor Wilkins said. Investors and market participants have to adapt to lower neutral rates. Countries must continue to work to meet their G20 commitments and take fiscal and structural measures that will improve long-term growth and productivity. Authorities have to continue to solidify the global financial system and guard against emerging problems.

“We have to adapt to the new reality of lower potential growth,” she said. “The faster we do this, the safer the financial system will be.”

(S)low for Long and Financial Stability 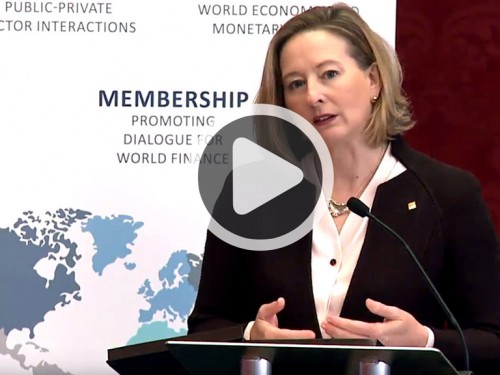