The Consumer Price Index (CPI) is an indicator of changes in consumer prices experienced by Canadians. It is obtained by comparing, over time, the cost of a fixed basket of goods and services purchased by consumers.

The CPI is widely used as an indicator of the change in the general level of consumer prices or the rate of inflation. Since the purchasing power of money is affected by changes in prices, the CPI is useful to virtually all Canadians.

The prices of certain CPI components can be particularly volatile. These components, as well as changes in indirect taxes such as GST, can cause sizeable fluctuations in total CPI.  In setting monetary policy, the Bank seeks to look through such transitory movements in total CPI inflation and focusses on “core” inflation measures that better reflect the underlying trend of inflation.

CPI-trim is a measure of core inflation that excludes CPI components whose rates of change in a given month are located in the tails of the distribution of price changes. This measure helps filter out extreme price movements that might be caused by factors specific to certain components. In particular, CPI-trim excludes 20 per cent of the weighted monthly price variations at both the bottom and top of the distribution of price changes, and thus it always removes 40 per cent of the total CPI basket. These excluded components can change from month to month, depending on which are extreme at a given time. A good example would be the impact of severe weather on the prices of certain food components. This approach differs from traditional a priori exclusion-based measures (e.g. CPIX), which every month omit a pre-specified list of components from the CPI basket.

CPI-common is a measure of core inflation that tracks common price changes across categories in the CPI basket. It uses a statistical procedure called a factor model to detect these common variations, which helps filter out price movements that might be caused by factors specific to certain components. 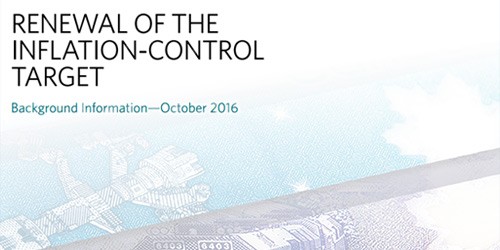 Renewal of the Inflation-Control Target (October 2016)

Commentary and technical data relating to the 2016 target renewal.