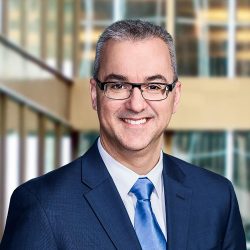 Mario Lefebvre was appointed Regional Director (Economics) at the Bank of Canada’s Quebec Regional Office in July 2020. In this capacity, he directs research and analysis on economic and sectoral developments in the region, including overseeing the Bank’s Business Outlook Survey in Quebec. Mr. Lefebvre also plays a major role in the office’s activities by communicating the Bank’s messages to various external audiences and promoting an exchange of views on the economy and monetary policy.

Mr. Lefebvre began his career as an economist in 1991 at the Bank of Canada where he worked in both the Research and International Departments.

In 1998, he joined The Conference Board of Canada where he stayed a total of 16 years.  He worked in the International Services Group, on projects with several Ministries of Finance and was also the Director of the Conference Board’s Centre for Municipal Studies from 2002 to 2013.

In January 2014, Mario Lefebvre joined the Québec Urban Development Institute, where he served as President & CEO for two years.  He then joined Ivanhoé Cambridge in January 2016 which he led and supervised the Research Team who monitored the economic and real estate fundamentals of markets from around the world.

Mr. Lefebvre holds a Bachelor’s and a Master’s degree in Economics from the University of Montreal. He is also a member of the Caisse de dépôt et placement du Québec’s Research Committee.  He was Chair of the Economic and Public Policy Committee at the Board of Trade of Metropolitan Montreal from 2011 to 2013 and Chair of the Public Policy Committee at the Quebec Economic Association from 2014 to 2016.   He co-authored the book Power Play: The Business Economics of Pro Sports, published in March 2014.

Staff Working Paper 1997-17 Mario Lefebvre
The purpose of this study is to compare the behaviour of regional labour markets in Canada and the United States. The study shows that the degree of persistence of unemployment is significantly higher in the provinces of Canada than it is in the various American regions.
Content Type(s): Staff research, Staff working papers Topic(s): Labour markets, Recent economic and financial developments JEL Code(s): E, E2, E24

The Commodity-Price Cycle and Regional Economic Performance in Canada

Staff Working Paper 1994-10 Mario Lefebvre
This paper examines whether the hypothesis of economic convergence holds for the Canadian provinces. Using data on real gross domestic product per capita and on factor productivity from 1966 to 1992, the paper shows, using two different methods, that the convergence hypothesis cannot be rejected. This evidence supports the findings of other authors who have studied convergence among Canadian provinces.
Content Type(s): Staff research, Staff working papers Topic(s): Recent economic and financial developments