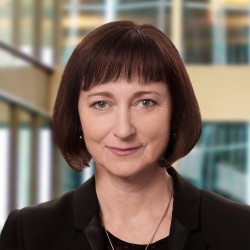 Advisor and Chief of Staff

Jill Vardy was appointed Advisor (Communications) and Chief of Staff, effective 3 January 2017. In this role, she provides strategic communications advice on major corporate and policy-related issues and works closely with Executive Council and department chiefs to maximize the Governor’s schedule and work priorities. She also plays a key role in strategic thinking and engagement with the Bank’s partners and stakeholders.

Ms. Vardy spent 14 years covering economics, finance, government policy and the technology sector for The Financial Post (later incorporated into the National Post). After covering economics in Toronto, she spent six years as a Parliament Hill reporter in Ottawa and six years as the National Post’s senior technology writer and columnist. In addition to writing, she also appeared frequently as a business panelist on CBC radio and television and taught economics and business journalism at Carleton University.

Ms. Vardy joined the Bank of Canada’s Communications Department in 2002 as a speechwriter for the Governor and other members of Governing Council. She became Director, Planning and Public Affairs, in 2006. In 2008, she served as the department’s Acting Chief and was then named Deputy Chief. She became Chief of Communications in December 2010, a position she held until her current appointment.