Securing long-term prosperity is up to all of us, Senior Deputy Governor Wilkins says

In remarks to the Economic Club of Canada, Senior Deputy Governor Carolyn A. Wilkins said aging populations and weak productivity gains are holding back prospects in many advanced economies, including Canada’s. Because “trend” growth is slower than in the past, the neutral interest rate—where borrowing costs don’t stimulate or restrain activity—is also lower.

That presents two key challenges that the Bank is thinking about ahead of the renewal of its monetary policy framework in 2021, she said. The first is that central banks have less room to support the economy by cutting interest rates if there’s a downturn. The second is that when interest rates are low for a long time, financial vulnerabilities can build. With these in mind, the Bank is looking at ways to bolster its policy framework and tool kit.

“The Bank of Canada already has a strong policy framework that has served us well for nearly three decades,” she said. “The work that we’re undertaking now to renew our inflation-control agreement and tool kit will only make that framework stronger for a world with low neutral interest rates.”

While trend growth is slower and neutral rates are lower, Wilkins said Canada is far from doomed to fall into “secular stagnation”—the kind of chronically slow growth and weak demand that Japan grappled with for more than two decades. This is because Canada has strong fundamentals: a population that’s still rising thanks to immigration; a healthy banking system; and the Bank’s long track record of achieving its inflation target, which has kept inflation expectations anchored around 2 percent.

To be prosperous well into the future, Canada and other advanced economies will need to look past monetary policy, she said. The best policies to guard against stagnation and improve living standards are those that raise the trend line for growth and lift the neutral rate.

“It’s up to all of us, in public policy and the private sector,” Wilkins said. “It will take decisive, ambitious policies at home and abroad. Yet, the payoff is clear: we’ll be more resilient to the next downturn, and we’ll secure long-term opportunity and prosperity for people in Canada and around the world.”

Securing prosperity is up to all of us

Our Economic Destiny: Written in R-stars? 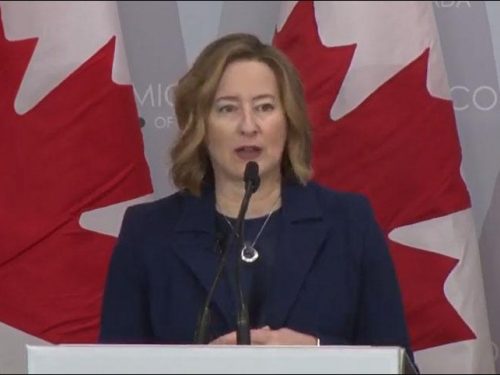 Central Banking in a slow-growth world — Senior Deputy Governor Carolyn A. Wilkins of the Bank of Canada speaks before the Economic Club of Canada. (12:30 (ET) approx.)