Good morning. Senior Deputy Governor Wilkins and I are happy to be with you to answer your questions about today’s interest rate announcement and our Monetary Policy Report (MPR). Before taking your questions, let me briefly offer a few insights into Governing Council’s deliberations.

Inflation is on target and the economy is operating close to potential. That statement alone underscores the considerable progress seen in the economy over the past 12 months.

That said, interest rates remain very low relative to historical experience. This is because the economy is not yet able to remain at full capacity on its own. Furthermore, the sustainability of this level of activity is not assured; although we expected the economy to moderate in the second half of 2017, that moderation has extended into early 2018 and has been more pronounced than expected. Governing Council considered recent economic data very carefully and concluded that the softness early this year was due mainly to two temporary factors.

The first relates to changes to mortgage rules that went into effect at the start of the year. These caused house sales to be pulled forward into the fourth quarter of 2017. Although we are still expecting the housing sector to moderate in 2018 compared with last year, we can expect a partial recovery of activity in the second quarter.

Accordingly, we expect a strong rebound in the second quarter after a lacklustre first quarter, with an average growth rate of about 2 per cent in the first half of the year and a return to near-potential growth thereafter. Fiscal stimulus, both provincial and federal, is playing a role in this forecast. We will be monitoring the data for the second quarter very closely in the weeks ahead.

Assuming our forecast remains on track, it is Governing Council’s view that interest rates will need to move higher over time to keep inflation on target. We acknowledge that the forces weighing on the economy mean that monetary policy is likely to remain stimulative to some degree, even if it is less stimulative than today. By this, we mean that interest rates may need to remain below the neutral range until various forces have dissipated. These would include, in particular, the uncertainty around trade conflicts and escalating geopolitical risks.

We have reviewed our work on the neutral interest rate and concluded that it still lies somewhere in the range of 2.5 to 3.5 per cent, given a 2 per cent inflation rate. Another useful benchmark that entered our discussions was the real policy rate, which takes into account the rate of inflation on the policy rate. Today, this benchmark is at minus 0.75 per cent. It is the view of Governing Council that the need for a negative real policy rate continues to diminish steadily, albeit gradually.

Most of our deliberations, therefore, concerned the appropriate pace of interest rate increases. As we have said repeatedly in the past, this is an intensely data-dependent process of risk management. We continue to be faced with four key sources of uncertainty around the outlook for inflation. Each of these represents the potential for either upside or downside risk to the inflation outlook, and therefore needs to be assessed to ensure that our risks remain balanced around the 2 per cent target.

First is the issue of economic capacity. We have done our extensive annual reassessment of economic potential and revised its profile higher, both in terms of its level and growth rate. This means that we have a little more room for demand growth within our 2 per cent inflation target than we believed before. Related to this, it is becoming increasingly evident that Canada’s international competitiveness challenges are hampering our export performance. Many firms are operating at or above their capacity, but are hesitating to invest in new capacity given the uncertain future of the North American Free Trade Agreement, transportation bottlenecks and a shortage of skilled workers, to name a few issues. This reluctance to expand capacity, in turn, also serves to limit growth in our exports.

It is possible that this represents a structural change in the Canadian economy, and the resolution would lie beyond the capability of monetary policy. For the central bank, the net effect on the inflation outlook will be our guide. The Bank is continuing to work on these issues and will offer more research in time for our next MPR in July.

The second issue is the dynamics of inflation itself. Recent data have been very reassuring. Indeed, the convergence of our three core measures around 2 per cent, as we forecast last year, has helped buttress confidence in our inflation models. Our forecast now shows inflation rising modestly above 2 per cent due to temporary factors, and then easing back to about 2 per cent during 2019. In this respect, it is worth underscoring that our target is a range of 1 to 3 per cent and that the average rate of inflation in the last few years has been below the midpoint of the range.

The third issue is wage dynamics. Recent data have been encouraging. Our summary measure of various wage series, called wage-common, shows that wage growth has picked up significantly in the last 18 months. We have noted before that we would expect wages to be growing by around 3 per cent in an economy operating close to capacity. We are approaching that zone now, although the latest figures have been boosted temporarily by minimum wage increases in some provinces. Furthermore, Governing Council acknowledged that these data can be difficult to interpret after a prolonged period of labour market slack. For example, wages tend not to decline during periods of high unemployment as much as our models might predict, and when the economy recovers, there is a lag before average wages respond. All things considered then, we continue to believe that there are elements of excess capacity in the labour market, as well as the possibility of productivity-enhancing labour market churn, that will add to the economy’s capacity.

Fourth, Governing Council has been monitoring the data for evidence that the sensitivity of the economy to interest rates has risen with household indebtedness. This issue will take longer to assess, especially given that the housing market and mortgage lending have also been affected by the new mortgage guidelines. However, we did note that household credit growth has continued to moderate, an important signal that is consistent with the idea that households are beginning to adjust to higher interest rates and the new mortgage rules.

Some progress has been made on the key issues being watched closely by Governing Council, particularly the dynamics of inflation and wage growth. This progress reinforces our view that higher interest rates will be warranted over time, although some degree of monetary policy accommodation likely will still be needed to keep inflation on target. The Bank will also continue to monitor the economy’s sensitivity to interest rate movements and the evolution of economic capacity. In this context, Governing Council will remain cautious with respect to future policy adjustments, guided by incoming data. 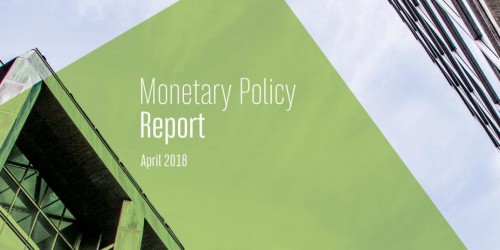 Media Relations Ottawa, Ontario
The Bank of Canada today maintained its target for the overnight rate at 1 ¼ per cent. The Bank Rate is correspondingly 1 ½ per cent and the deposit rate is 1 per cent.
Content Type(s): Press, Press releases
April 18, 2018 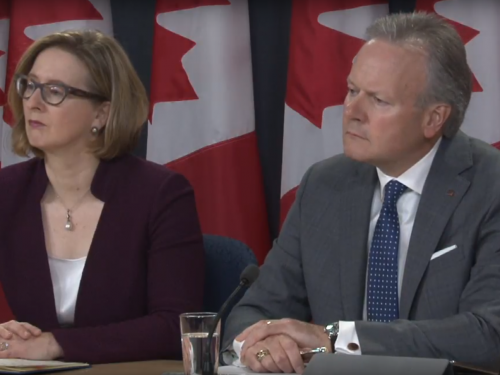