The Canadian economy has made excellent progress during 2017, but there is still important work to be done on several longer-term issues, Bank of Canada Governor Stephen S. Poloz said today.

In a speech to the Canadian Club Toronto, Governor Poloz noted that the Canadian economy was the fastest-growing among the Group of Seven economies. Still, issues such as the threat of a cyber attack, high house prices and elevated household debt, and the tough labour market for young Canadians continue to be a preoccupation, he said.

An important role for the central bank is to help promote understanding of economic issues. “Issues that appear daunting often become less so when we understand them better,” the Governor said. “A better understanding of the issues helps everyone—from the various government authorities to the public at large—determine what should be done to resolve them.”

While high house prices and elevated household debt remain a vulnerability, new mortgage guidelines, including the mortgage interest rate stress test, are a positive development. “Testing yourself to make sure you could handle your mortgage payments if interest rates were higher at renewal is a good idea, whether it is a rule or not,” Governor Poloz said.

In terms of employment for young people, the Governor spoke of the importance or reversing a long decline in their labour force participation. While unemployment is a concern across all age groups, “I want to concentrate on young people, for whom a long period of unemployment can leave a scar that could last a lifetime,” Governor Poloz said. Bringing youth back into the labour force will help build economic capacity, he added.

“These are all long-term issues that will continue to be major preoccupations for myself personally, and for the Bank of Canada,” Governor Poloz concluded. “The Bank will continue to work on these issues while doing our part to help bring about a strong and stable economy. This has been the Bank of Canada’s role since our beginning. And it will remain our role for years to come.” 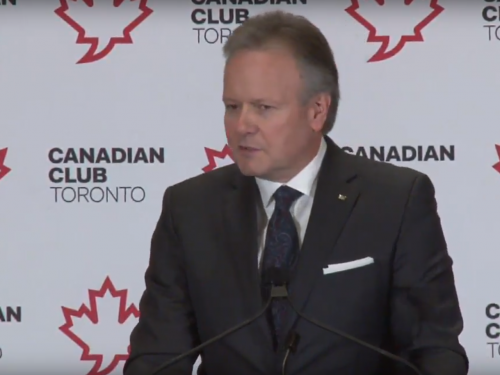 Things keeping the Governor awake at night - Stephen S. Poloz, the Governor of the Bank of Canada, speaks before the Canadian Club Toronto. (12:40 (ET) approx.) 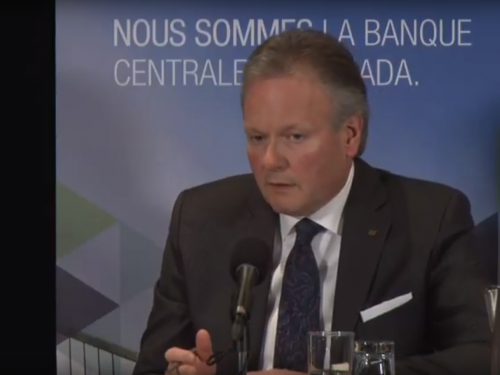