Good morning. Governor Poloz and I are pleased to be here to answer your questions about today’s interest rate announcement and our Monetary Policy Report (MPR). There were a number of issues that were central to Governing Council’s deliberations that I would like to elaborate on before turning to your questions.

Many of the economic data that we have seen since our last MPR have been stronger than expected. That is certainly a welcome change. Given these positive surprises, and because monetary policy must be forward-looking to achieve our inflation target, Governing Council’s discussions focused on three main issues: first, the extent to which recent strength is signalling stronger economic momentum in Canada and globally; second, how heightened levels of uncertainty, particularly about US tax and trade policies, should be incorporated in our outlook; and third, how much excess capacity the economy currently has, and the growth rate of potential output going forward.

Let me start with the first issue. In our view, some of the upward surprises come from factors that are unlikely to keep adding to economic growth at the same pace. Energy-related activity has stopped declining and is transitioning to a new level that companies tell us is commensurate with the current oil price environment. This is good news. Consumption has also been more robust than expected as households have benefited from the Canada Child Benefit. This will continue to support the level of spending, but not the growth rate.

Housing activity has also been stronger than expected. We have incorporated some of this strength in a higher profile for residential investment, although we still anticipate slowing over the projection horizon. The current pace of activity in the Greater Toronto Area (GTA) and parts of the Golden Horseshoe region is unlikely to be sustainable, given fundamentals. That said, the contribution of the housing sector to growth this year has been revised up substantially. Price growth in the GTA has accelerated sharply in recent months, suggesting that speculative forces are at work. Governing Council sees stronger household spending as an upside risk to inflation in the short term, but a downside risk over the longer term.

Meanwhile, exports and investment are still weaker than one would expect at this stage of the business cycle, even though growth in the global economy has also surprised on the upside. So, we do not yet see the well-balanced base that would give us assurance that growth is on a solid footing.

This brings me to the second issue. Given the performance of exports and investment, the uncertainty regarding the tax and trade policies of the US administration again factored prominently in our discussions. The Bank of Canada is quite used to dealing with uncertainty, and we were very deliberate in choosing how to incorporate it into our projections and policy decision.

In terms of potential US tax measures, we judged in January that there was enough information available to make some initial assumptions. There are now signs that suggest implementation will be delayed, and so we have updated these assumptions.

We took a different approach to uncertainty about potential US trade policies. We now have a better sense than in January of the extremely wide range of possibilities: they include a border-adjustment tax, targeted tariffs on some products and countries, non-tariff barriers and even broader multilateral trade measures. We do not know which of these will be enacted; their timing is uncertain; and each would affect the global economy and Canada through a different, complex set of channels. Take a look at Box 1 of the Report for a discussion of this.

Although it is fair to say that the possible outcomes are almost certainly negative for Canada, we cannot reliably model them at this stage. Instead, we have incorporated an extra degree of caution in our forecast for exports relative to our January forecast, including the potential implications of the softwood lumber dispute.

We have also been cautious with our forecast of business investment. While businesses are becoming more confident, they remain wary. When we talk with companies, many tell us that planned increases in investment are modest, or related to maintenance, rather than to expansion.

Overall, we project economic growth in Canada to slow from an annual pace of 3.8 per cent in the first quarter to just over 2 per cent for the remainder of the year. We project growth of just under 2 per cent in 2018 and 2019.

Given the stronger profile of economic activity relative to January, Governing Council was very focused on the third issue: how much excess capacity remains in the economy. We use a couple of different methods to gauge the amount of excess capacity, which gives us a range of estimates of excess supply. Evidence from inflation data is also consistent with material excess capacity remaining. Although a number of temporary factors are keeping headline inflation near its 2 per cent target, our measures of core inflation are in the lower half of the target band and have been trending downward in recent quarters. Evidence from the labour market has been mixed. Employment growth has been firm, yet both wages and unit labour costs have risen only slowly, supporting the view that the amount of excess capacity could be greater than the midpoint of the range of estimates.

Finally, there is the related issue of how quickly the economy’s potential will grow. We still expect potential output growth to increase, but by less than we did a year ago, when we last updated our estimates. You can see from the Staff Analytical Note that we published today that this is mainly due to weak investment. That said, as the economy gains momentum and approaches full capacity, greater investment—including through new firm creation—could lead to potential output growing faster than we assume in the base case. Some of the tools used by the Bank have tended to underestimate growth in potential output during periods of expansion, leading to upward revisions later on. If potential growth turns out to be greater than we expect, the economy could expand further before generating inflationary pressures.

Under our baseline outlook for growth and potential, the economy will absorb its excess capacity sometime in the first half of 2018, a bit sooner than we projected in January. I would also point out that we now judge that the neutral interest rate in Canada is lower than we thought previously. While financial conditions are still very supportive of growth, this implies that they are somewhat less stimulative now than we judged in January.

This brings me to our policy decision in pursuit of our inflation target. Governing Council welcomes the recent strength in economic data and wants to see more of it in order to be more confident that growth is on a solid footing. We judge that the economy still has material room to grow. And we remain mindful that significant uncertainty continues to weigh on the outlook.

Given all of this, we judged that the current stance of monetary policy is still appropriate and maintained the target for the overnight rate at 1/2 per cent.

Governor Poloz and I would now be happy to answer your questions. 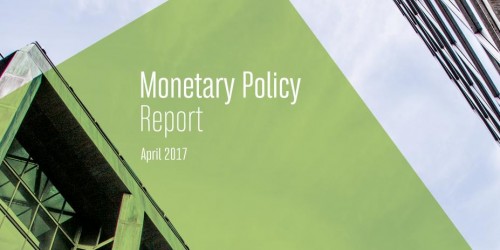 Media Relations Ottawa, Ontario
The Bank of Canada today announced that it is maintaining its target for the overnight rate at 1/2 per cent. The Bank Rate is correspondingly 3/4 per cent and the deposit rate is 1/4 per cent.
Content Type(s): Press, Press releases
April 12, 2017 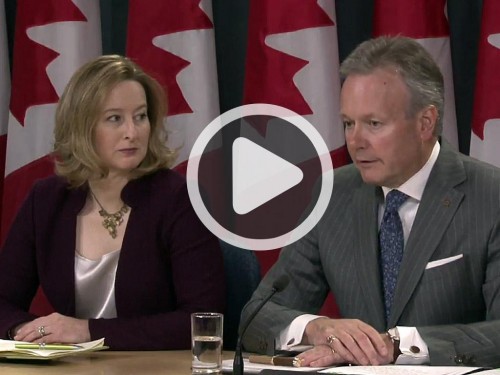