Good morning. Senior Deputy Governor Wilkins and I are happy to be here to answer your questions about today’s interest rate announcement and our Monetary Policy Report (MPR). Let me elaborate on some selected issues that were central to the Governing Council’s deliberations.

The uncertainty we face as forecasters and policy-makers remains undiminished. The MPR outlines a number of risks to our projection in both directions. In our discussions, Governing Council was particularly concerned about the ramifications of US trade policy, because it is so fundamental to the Canadian economy. But we cannot capture these in our projections because they are simply unknown at this point.

We considered the possibility of not incorporating any US policy changes in our projection. However, Governing Council felt that some form of fiscal stimulus was likely over our projection horizon. Accordingly, we have made some reasonable initial assumptions about fiscal initiatives—specifically, corporate and personal tax cuts that would raise the level of US GDP by about 0.5 per cent in 2018. This assumption could be recalibrated in either direction, but doing the work now provides a framework for analyzing the situation as it evolves, while also giving us a better balance of risks over the projection horizon.

According to our analysis, a US fiscal shock of this magnitude would probably have only small effects here in Canada, boosting GDP by about 0.1 per cent by 2018. This is because there are three important offsets that would limit the transmission of such a US fiscal shock to Canada.

Second, an important consequence of rising US optimism has been an increase in US bond yields, some two-thirds of which has been imported into Canada— much more than in many other countries. While this reaction is consistent with past correlations, it is at odds with Canada’s macroeconomic situation where there is material excess capacity, unlike the US economy. This divergence in economic performance is mainly due to the setback Canada endured when oil prices collapsed. Canadian 5-year mortgage rates have already risen in response to higher bond yields, which will act as an additional drag on housing demand in Canada.

Third, the US dollar has moved higher against most other currencies. Because the Canadian dollar has held its own against the US dollar in this context, largely due to higher oil prices, it has also been rising against most other currencies. This combination creates two additional headwinds for Canadian exports: softer US exports will mean lower demand for Canadian components of those US exports; and Canada will lose more competitiveness in the US market compared with exporters from other countries.

With respect to our export forecast, today we are publishing two new staff discussion papers on our modelling of exports. The main insight is that our previous model may have put too much weight on developments in the US economy and not enough on other economies, both in terms of demand growth and in terms of measures of competitiveness. Suffice it to say that the two new models both explain most of the missing exports we have been talking about—amounting to some $30 billion to $40 billion—and predict slower export growth in the future than our previous model. The projections we are laying out today are similar to those from October, because we were already testing the new models then and used them to form our judgement.

That said, our updated projection—which, I should remind you, is more conditional than usual—shows the Canadian economy experiencing above- potential economic growth for the next several quarters. This would imply a steady narrowing of Canada’s excess capacity over the projection horizon. While some of the recent data have been encouraging—I am thinking in particular of the latest data on exports, employment and business sentiment in our BOS—they do not support a forecast of above-potential growth by themselves. Rather, that projection continues to rely on the expected effects of domestic fiscal stimulus. We have already seen some early effects from the Canada Child Benefit on household spending, and there have been some new measures introduced at the provincial level. But the main ingredient in our forecast is the federal infrastructure program, which is well under way but not yet evident in the economic indicators we are tracking. In fairness, the best place to see this is in the national accounts data, which are so far available only through the third quarter of 2016.

All of this matters because persistent excess capacity puts downward pressure on inflation, raising the risk that we will continue to fall short of our inflation target. We have recently introduced three new measures of core inflation, each with its own strengths and weaknesses. These are not target variables. Rather, they are analytical tools. They help us to see through shocks and give a better guide to what is happening to the underlying trend in inflation. In particular, they are much more correlated with excess capacity than total inflation is, simply because total inflation is constantly being buffeted by temporary price disturbances.

Our new measures of core inflation are all below 2 per cent presently, weighed down by excess capacity in the economy. In addition, food prices have been running below expectations in recent months, due in part to enhanced competition at the retail level, something we will continue to monitor. Looking ahead, Governing Council expects inflation to move up to close to 2 per cent in the near term, mainly because of firmer energy prices. More importantly, our growth outlook would imply a narrowing of the economy’s excess capacity over the course of 2017 and into 2018. So in the absence of any new shocks we would expect all inflation measures to converge sustainably on 2 per cent in the latter part of our projection horizon.

To conclude, in the context of a projection that is largely unchanged, the Bank’s Governing Council judges that the current stance of monetary policy is still appropriate and maintains the target for the overnight rate at 1/2 per cent. Governing Council will continue to assess the impact of ongoing developments, mindful of the significant uncertainties weighing on the outlook.

Thank you for your attention. Now, Senior Deputy Governor Wilkins and I would be happy to take your questions. 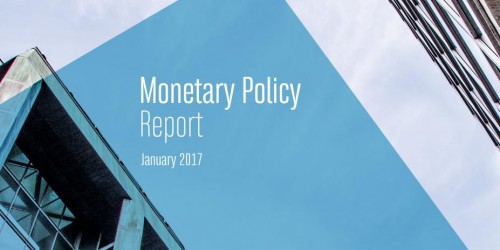 The Canadian economy is expected to expand by 2.1 per cent this year and in 2018.

Media Relations Ottawa, Ontario
The Bank of Canada today announced that it is maintaining its target for the overnight rate at 1/2 per cent. The Bank Rate is correspondingly 3/4 per cent and the deposit rate is 1/4 per cent.
Content Type(s): Press, Press releases
January 18, 2017 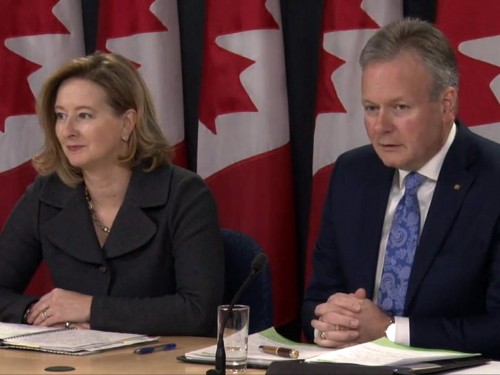