Good morning. Senior Deputy Governor Wilkins and I are happy to be here to answer your questions about today’s interest rate announcement and our Monetary Policy Report (MPR). Let me begin as usual with a few remarks about the issues that were most important to the Governing Council’s deliberations.

I’ll start with a reminder of where we were at the time of our last MPR in January. Financial market participants started the year in a very anxious mood. The global growth outlook was being downgraded again, commodity prices were plumbing new lows and we had new intelligence that Canadian energy companies would be cutting investment even more than previously thought. In this context, we said that we entered deliberations with a bias to easing policy further, but first we needed to see the government’s fiscal plan.

Our new economic projection incorporates that fiscal plan, but let me first talk about three other important changes that we have also taken into account.

First, projected global economic growth has once again been taken down a notch for 2016 and 2017. This includes the US economy, where the new profiles for investment and housing mean a mix of demand that is less favourable for Canadian exports.

Second, investment intentions in Canada’s energy sector have been downgraded even further. True, oil prices have recovered significantly from their extreme lows. But Canadian companies have told us that even if prices remain around current levels, there will be significant further cuts beyond what we foresaw in January. By convention, we incorporate the average oil price from the few weeks before we make our forecast, letting us look through variability in markets. Because of this, our oil price assumptions are only $2 to $3 per barrel higher than in January.

Third, the Canadian dollar has also increased from its lows. Our assumption in this projection is US 76 cents, four cents higher than in January. While there are many factors at play, including oil prices, most of the increase appears to be due to shifts in expectations about monetary policy in both the US and Canada. The higher assumed level of the dollar contributes to a lower profile for non-resource exports in our projection, as does lower demand from the US and elsewhere.

Governing Council judged that the combination of slower global and US growth, a new round of cuts to investment in Canada’s energy sector, and a stronger Canadian dollar would have meant a lower projected growth profile for the Canadian economy than we had in January. I know this sounds contrary to what you have heard lately, because a range of monthly economic indicators have started the year strongly. Some of this strength represents a catch-up after temporary weakness in the fourth quarter, and some of it reflects temporary factors that will unwind in the second quarter. We think it is best to look through that variability, and note that the economy appears to be achieving average growth of close to 2 per cent in the first half of the year, which is encouraging.

That brings me to the fourth important item that’s changed since January—the recent federal budget. We can’t be entirely certain about the full effects of the budget on the economy, as some will depend on how households react over time. But Governing Council judged that the budget actions will more than offset the negatives from the other three changes I just mentioned. The net effect is that our projected growth profile is generally higher than it was in January.

When it comes to projecting inflation, we must consider our forecast for economic growth relative to the economy’s potential, or capacity. We do a fulsome review of Canada’s economic potential at this time each year, and this was an especially important part of the Governing Council’s deliberations. That is because, as we highlighted in last October’s MPR, it is particularly difficult to measure capacity when an economy is undergoing a structural adjustment, as Canada’s is. That translates into increased uncertainty around the size of the output gap and the speed at which it will close, and therefore the point at which the disinflationary pressures we see today will dissipate.

Specifically, the collapse in investment in the commodity sector will mean a slowdown in the economy’s potential growth rate. In the near term, we’ve lowered potential output growth from 1.8 per cent to 1.5 per cent. You can find details in a staff analytical note we published today. Later this year, the natural sequence of higher non-resource exports and a tightening of capacity constraints should lead to higher investment and employment in the non-resource economy, and therefore growing capacity. Looking beyond the projection horizon, growth in potential output overall should pick up again. This newly-added capacity may give the economy some additional room for non-inflationary growth beyond what we are assuming today.

Today’s forecast suggests that the economy will likely use up its excess capacity somewhat earlier than we predicted in January—sometime in the second half of 2017. However, as I said, there is more than the usual degree of uncertainty around that timing. For example, we are taking a conservative approach in assuming that only some of the legacy effects of the past several years—such as reduced labour force participation by young people—will be reversed over the next few years. This would add back to economic potential some of what has been lost. However, we will need to monitor carefully data on investment, labour force re-entry and new firm creation to update this judgment over time.

In sum, recent economic data have been encouraging on balance, but also quite variable. The global economy retains the capacity to disappoint further, the complex adjustment to lower terms of trade will restrain Canada’s growth over much of our forecast horizon, and households’ reactions to the government’s fiscal measures will bear close monitoring. We have not yet seen concrete evidence of higher investment and strong firm creation. These are some of the ingredients needed for a return to natural, self-sustaining growth with inflation sustainably on target.

In light of all of these considerations, Governing Council agreed that the current level of our policy rate remains appropriate. With that, Carolyn and I are ready to take your questions. 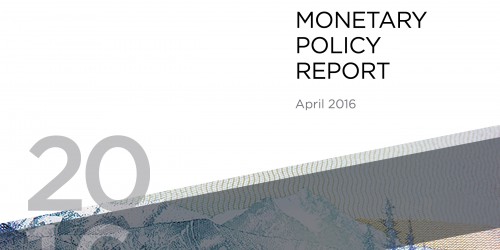 Media Relations Ottawa, Ontario
The Bank of Canada today announced that it is maintaining its target for the overnight rate at 1/2 per cent. The Bank Rate is correspondingly 3/4 per cent and the deposit rate is 1/4 per cent.
Content Type(s): Press, Press releases
April 13, 2016 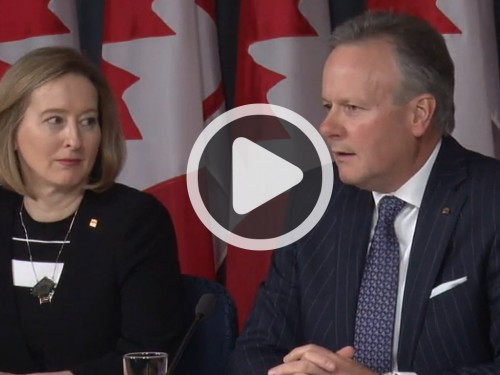 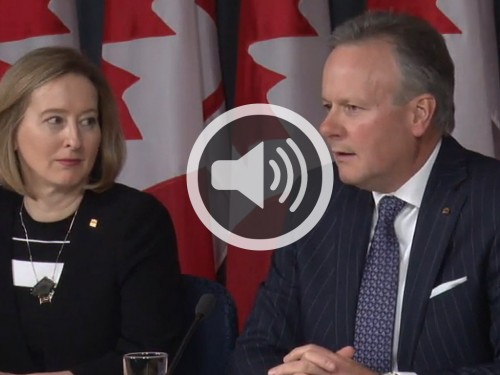