Good morning. We are happy to be here to answer your questions about today’s interest rate announcement, and our October Monetary Policy Report (MPR). We will begin with a few remarks about the issues that were most important to the Governing Council’s deliberations.

Let’s start with the global context. We expect the global economy to strengthen over the next couple of years, although on a lower path than predicted in our last MPR in July. Growth is being supported by accommodative monetary policy and the positive effects of low oil prices in a number of economies. The U.S. economy continues to strengthen largely as we expected, shaking off the temporary factors that held it back earlier in the year. We see particular strength in areas that are important to Canadian exports, such as business investment.

However, we also see weaker growth prospects in a number of emerging-market economies, particularly China. Governing Council spent a lot of time discussing what this means for Canada. There has been volatility in financial markets and downward pressure on the prices of many commodities that Canada sells.

China is transitioning to a lower and more sustainable long-term growth path. While this transition may not happen in a straight line, China should continue to be a solid source of growing demand for commodities. If you look at Chart 8 of the MPR, for example, you’ll see that Chinese imports of copper are still rising strongly in volume terms.

Nonetheless, there is downside risk for some emerging-market economies, particularly in the context of U.S. monetary-policy normalizing. In our discussions, we thought it was important to keep in mind that many of these countries have become more resilient in recent years: they have been restructuring their economies, strengthening their fiscal positions, and moving to more flexible exchange rates. Given these factors, if uncertainty fades about the prospects for China and other emerging markets, there is some upside risk to our commodity price assumptions, with implications for Canada.

Let’s now turn to Canada. While the first half of the year was weak, there are clear signs of a pickup in growth. Taken as a whole, the second half should see growth in line with our July outlook, and we expect the economy will gather strength over the next couple of years.

The complex adjustment to Canada’s terms of trade shock is playing out over two tracks. In the resource sector, we see firms cutting production and investment. We are also seeing spillovers into other areas of the economy. It’s not surprising that car sales and housing markets in energy-producing regions aren’t doing as well as those in other regions. We estimate that the oil price shock, on its own, took about 1 1/4 percentage points off GDP growth in the first half of the year.

At the same time, Canada’s non-resource economy is doing much better. Table 4 in the MPR shows that retail sales, housing starts and labour markets are showing solid strength outside of the energy-intensive provinces.

Non-energy exports are also showing encouraging signs. You’ll recall that in July we were puzzled because non-energy exports had faltered by more than would have been expected given developments in the United States. So Bank staff have updated the analysis that they did last year by looking at more than 4,000 export categories. This work was posted today on our web site. It shows that categories of exports that were expected to lead the recovery—such as building materials and fabricated metal products—have grown strongly in recent months, and new sources of export growth are emerging.

While it’s clear that there are risks to our outlook, the bottom line is that economic momentum is building in Canada. Real GDP growth should increase over the next two years, although by less than we forecast in July. Lower commodity prices and the drop in energy-related business investment are acting as significant drags. At the same time, stronger U.S. demand, a lower Canadian dollar and the monetary stimulus we added earlier this year are all having a positive effect on growth.

Governing Council considered carefully the implications of the commodity price shock on potential output because it is important to gauging the outlook for inflation. Potential output growth—the sustainable rate of non-inflationary growth—is a tricky thing to estimate under normal circumstances. It is even more so now, due to the adjustments in investment and jobs that are underway. Overall business investment has been revised sharply lower. This is because investment in the resource sector is being reduced faster than it is growing in the non-resource part of the economy. This means that, over the near term, potential output is likely to grow in the lower part of the range of estimates that the Bank presented in April. Potential output growth should eventually recover as existing capacity expands and new firms are created in the non-resource sectors. This process will unfold over a long period.

Taking this on board, we can expect the economy to return to its full potential around mid-2017. The underlying trend in inflation is still around 1.5 to 1.7 per cent. Core inflation is currently higher than the underlying trend, because the lower dollar is raising the prices of imports. Today, we published a paper that outlines our staff estimates of exchange rate pass-through to inflation. Total inflation, however, remains much lower than the underlying trend because of past declines in fuel prices. We expect inflation to return to 2 per cent in a sustainable way as the output gap closes. We see the risks around the profile for inflation as roughly balanced.

As part of our risk management approach to monetary policy, Governing Council always considers financial stability risks. We know that accommodative policy has implications for financial vulnerabilities in the household sector. In the current context, getting the economy back to full capacity with inflation on target is central to supporting financial stability over the longer term.

Taking all of these developments into consideration, the Bank judges that the current stance of monetary policy remains appropriate. Therefore, we kept the target for the overnight rate at 1/2 per cent.

We would now be happy to take your questions. 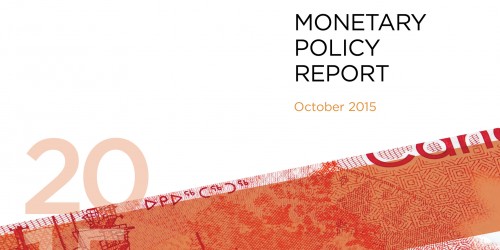 Media Relations Ottawa, Ontario
The Bank of Canada today announced that it is maintaining its target for the overnight rate at 1/2 per cent. The Bank Rate is correspondingly 3/4 per cent and the deposit rate is 1/4 per cent.
Content Type(s): Press, Press releases
October 21, 2015 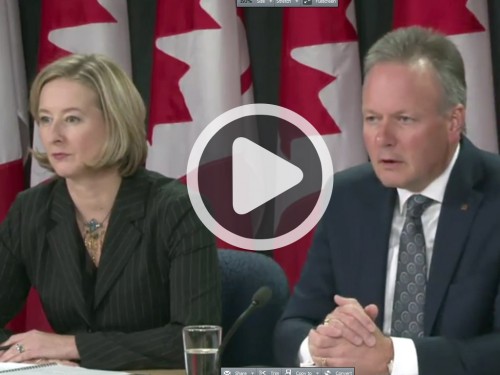