Good morning. Carolyn and I are happy to be here to answer your questions about today’s interest rate announcement and our latest Monetary Policy Report (MPR). Let me begin with a few remarks around the issues that were most important to the Governing Council’s deliberations.

I’ll start with the global context. The plunge in oil prices was due mostly to strong supply growth, but a softening in demand growth also contributed. A wide range of other commodity prices have declined further this year, also suggesting a softer world economy. In this context, we have seen many central banks ease policy this year, ourselves included.

This widespread easing, coupled with the positive implications of lower energy prices for world growth, leads us to the conclusion that the global economy will pick up through the year. Increased economic divergence is prompting divergent monetary policies as well, and is delivering more exchange-rate volatility and, on net, more strength in the U.S. dollar.

Turning to Canada, as we stated in the January MPR, although lower oil prices would have both upside and downside effects on Canada, the net impact would be negative. The negative effects would be immediate and seemed quite certain, whereas the positive effects would be more gradual and less certain. Therefore, we faced a risk that our return to full capacity and stable 2 per cent inflation would be delayed significantly. Accordingly, in January we took out some insurance against that risk, in the form of a 25-basis-point reduction in the policy interest rate.

Our cut led to lower rates across our entire yield curve and a lower Canadian dollar. Meanwhile, oil prices stabilized and recovered to levels around our January forecast assumptions. And, as we monitored the data, we saw that some of the effects of lower oil prices were already being felt during the fourth quarter of 2014.

The updated forecast in today’s MPR suggests that the economy saw no growth in the first quarter. I want to emphasize that policy does not hinge on decimal points – we always know we are dealing with a range of possible outcomes. Interpretation of the recent data is complicated by the slowdown in the U.S. in the same quarter, which no doubt was partly due to severe weather and a port strike in Los Angeles. We had some unusual weather ourselves. However, our best judgement is that the data we have received so far remain consistent with the view that the impact of the oil price shock is proving to be faster than initially expected, not larger.

Outside of the energy sector, other areas of the economy appear to be doing well. In particular, the segments of non-energy exports that we have been expecting to lead the recovery have been doing so, and we expect this trend to be buttressed by stronger U.S. growth and the lower Canadian dollar. Our Business Outlook Survey indicates that capacity constraints are beginning to emerge for exporters, which is promising for new investment. And, although we still have material slack in our labour market, the market’s fundamentals have begun to improve. Even so, companies remain cautious about new investment and hiring intentions.

Weighing these various forces acting on the economy, we are anticipating a rebound in growth in the second quarter, and a move to above-trend growth thereafter, for annual growth of 1.9 per cent this year. This projected growth profile gets us back on track to use up our excess capacity around the end of 2016, at which time inflation will settle sustainably on 2 per cent. We see the risks around this projection as roughly balanced, but they will be reassessed continuously as new data become available.

The main risk is the size and duration of the negative impact of the oil shock, weighed against the positive forces that are building in the non-energy export sector. Our outlook is for the positives to begin to reassert themselves during the second quarter, and to do so clearly in the second half of the year. The interest rate cut of January and the lower Canadian dollar are working to speed up the transition. To give just one example, exporting companies with existing contracts denominated in U.S. dollars are seeing an immediate 8 per cent increase in Canadian-dollar cash flow, and will be able to compete more aggressively for future sales.

Inflation as measured by total CPI today is running at about 1 per cent, well below our 2 per cent target. This is largely due to the drop in gasoline prices, a temporary effect. But total CPI inflation would be even lower than 1 per cent, in fact quite close to zero, were it not for exchange-rate effects, which are boosting total inflation by 0.6 to 0.7 percentage points, and some additional one-time factors. Core inflation is running at about 2 per cent, but it is also being boosted by exchange-rate effects and a couple of other one-time factors.

Because monetary policy takes up to two years to have its full effect on inflation, responding to every fluctuation in prices would be counter-productive. Therefore, we generally look through inflation variations that, in our judgement, will prove temporary. These judgements constitute a very important part of our deliberations. Presently, we are looking through the effects of the drop in oil prices, the effects of the recent depreciation of the Canadian dollar, and the one-time effects of fluctuations in meat and telecommunications prices. This is why we refer to “underlying inflation”, which estimates and excludes what we judge to be temporary factors, and is driven mainly by the changes in the degree of excess capacity in the economy. In our projection, total inflation, core inflation and underlying inflation all converge on the same level once temporary factors have dissipated.

Meanwhile, the issue of financial stability risks remains front-and-centre in our deliberations. These risks are evolving in line with our expectations. The level of indebtedness, as measured by the debt-to-disposable income ratio, continues to rise. It is likely to rise further as the decline in gross national income, due to the halving of oil prices, works its way through the system. On the surface, lower interest rates would be expected to promote more borrowing, which would increase this vulnerability. However, in the near term, lower borrowing rates will actually mitigate this risk, by reducing payments for mortgage holders and giving us more economic growth and employment gains. We believe that the best contribution the Bank can make to easing financial stability risks through time is to help the economy return to full capacity and stable inflation sooner, rather than later.

With that, Carolyn and I would be happy to take your questions. 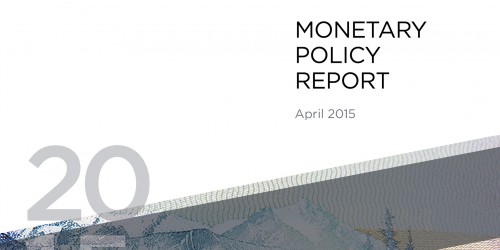 Media Relations Ottawa, Ontario
The Bank of Canada today announced that it is maintaining its target for the overnight rate at 3/4 per cent. The Bank Rate is correspondingly 1 per cent and the deposit rate is 1/2 per cent.
Content Type(s): Press, Press releases
April 15, 2015 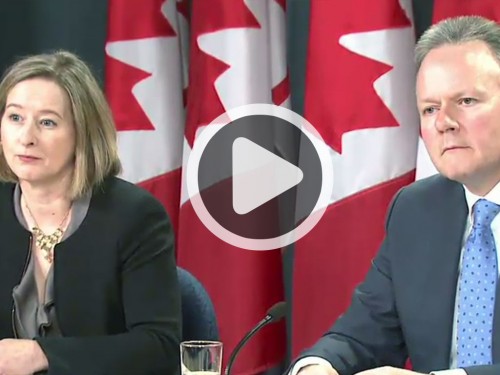 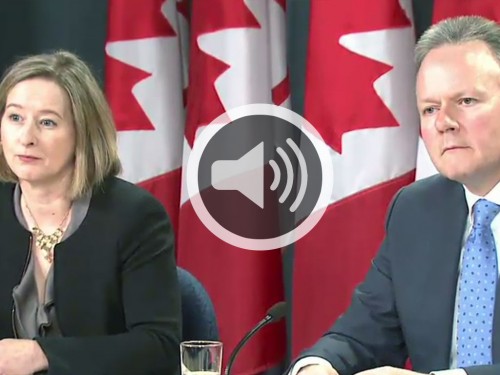