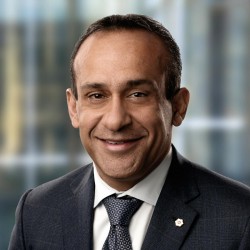 Peter P. Dhillon was appointed to the Board of Directors of the Bank of Canada in December 2017.

He was a member of the Board of Directors of the Vancouver 2010 Bid Corporation and served as chairman of the audit committee for the Vancouver 2010 Organizing Committee Board. He is also a past chair of the Vancouver branch of the Right to Play, an international humanitarian organization for children in communities affected by war, poverty and disease.

Mr. Dhillon is widely known for his philanthropic work, particularly in the areas of health care, child humanitarian support, education and sport. He has made significant financial contributions to the Kwantlen Polytechnic University, the Canadian Red Cross, the Canadian Olympic Committee, Arts Umbrella and the Khalsa Diwan Society. In his father’s memory, he established both the Rashpal Dhillon Fund in Idiopathic Pulmonary Research and the Rashpal Dhillon Fund in Cranberry Research at UBC, as well as the Rashpal Dhillon UBC Track and Field Oval. In 2015, he established the Peter P. Dhillon Centre for Business Ethics, in partnership with the Sauder School of Business at UBC.

Mr. Dhillon was appointed to the Order of British Columbia in 2009 and is a recipient of the Diamond Jubilee Medal.