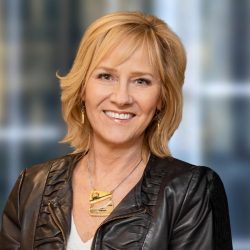 Mariette Mulaire was appointed to the Bank of Canada’s Board of Directors in June 2018.

As of June 2022, Ms. Mulaire takes on the role of Strategic Advisor to the World Trade Centres Association (WTCA) at its headquarters in NYC.  From April 2012 to 2022, she served as president and chief executive officer (CEO) of the World Trade Centre Winnipeg since its official opening. She continues to sit on the board of the WTCA, but now, as a non-voting member. She also served as the president and CEO of the bilingual trade agency for Manitoba (ANIM) since its inception in 2007, where her involvement in numerous economic development initiatives on behalf of Manitoba included spearheading the creation and hosting of Centrallia, the first international business-to-business forum of its kind in western Canada. Her previous economic development experience includes 10 years as executive director for the Economic Development Council for Manitoba Bilingual Municipalities (CDEM), and working with Western Economic Diversification Canada (WD) and Canadian Heritage.

Ms. Mulaire’s participation in local and national associations and initiatives includes serving on the boards of TV5 Québec Canada, Canada West Foundation, and The Associates, the business organization supporting the Asper School of Business of the University of Manitoba. She was co-chair of the Canada Summer Games 2017 Host Society and spokesperson for Les Rendez-vous de la Francophonie in 2017 and 2018 as well as honorary chair for the 200 years of the Université de Saint-Boniface.

She was awarded the Ordre des francophones d’Amérique in 2010, was the 2011 recipient of the YMCA-YWCA Women of Distinction award in the leadership category, and received the Queen Elizabeth II Diamond Jubilee Medal in 2012. She was the 2015 recipient of the Award of Excellence—Promotion of Linguistic Duality from the Office of the Commissioner of Official Languages. She received the Prix Riel and the Prix Maurice Gauthier in 2017 in recognition of her ongoing commitment to the promotion of linguistic duality in Manitoba and Canada.