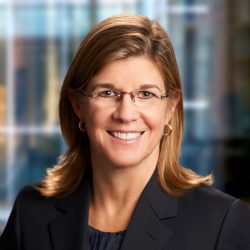 Lynn Patterson served as Deputy Governor from May 2014 until her retirement from the Bank in July 2019. In this capacity, she was one of two deputy governors responsible for overseeing the Bank’s analysis and activities promoting a stable and efficient financial system. As a member of the Bank’s Governing Council, she shared responsibility for decisions with respect to monetary policy and financial system stability, and for setting the strategic direction of the Bank.

Before her appointment, Ms. Patterson served as Special Adviser to the Governor and Senior Representative (Financial Markets) at the Bank’s Toronto Regional Office, a position she was appointed to in June 2013.

Ms. Patterson received an honours degree in Business Administration from the University of Western Ontario and a designation as a Chartered Financial Analyst. Ms. Patterson joined the Bank with more than 25 years’ experience in capital markets, risk oversight and senior management roles, including as President and Country Head for Bank of America Merrill Lynch Canada. Before her appointment as President and Country Head, she held a variety of positions at the firm within the fixed income and equity sales and trading platforms.

Ms. Patterson has served on the Government of Ontario’s Economic Advisory Panel and is a recipient of the Diamond Jubilee Medal as a builder and innovator in Canada’s investment industry.