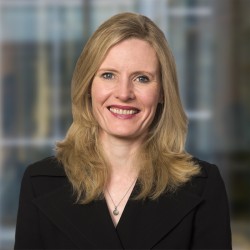 Claire Kennedy was appointed to the Bank of Canada’s Board of Directors in December 2012. She is currently the Board’s Lead Director. Born in Toronto, Ontario, Ms. Kennedy received her BASc in Chemical Engineering & Applied Chemistry from the University of Toronto in 1989 and her LL.B from Queen’s University in 1994. Called to the bar in Ontario in 1996, Ms. Kennedy was law clerk to the late Honourable Mr. Justice Charles D. Gonthier of the Supreme Court of Canada.

Ms. Kennedy was appointed to the University of Toronto’s Governing Council in 2012 and has served as Chair since 2017. She is also a member of the Dean’s Advisory Board at the Rotman School of Management. Ms. Kennedy is a director of Alamos Gold Inc. and currently serves as Chair of the Board at Neo Performance Materials Inc.

Ms. Kennedy has an ICD.D designation from the Institute of Corporate Directors, and has completed the Making Corporate Boards More Effective program at Harvard Business School, the Financial Literacy Program for Directors and Executives at the University of Toronto’s Rotman School of Management and the Advanced Management Program at the University of Chicago’s Booth School of Business.

Statement by Claire Kennedy on Announcement of New Governor