A Canadian interest rate benchmark regime for the future

Good morning. Thank you for inviting me to introduce this panel discussion.

And thanks to the International Swaps and Derivatives Association (ISDA) for hosting our event. I’m glad to be here alongside these exceptional panelists to talk about some important changes that may be coming to Canada’s interest rate benchmarks.

The Bank of Canada is a member of this steering group. One of the Bank’s core functions is to foster a stable and efficient financial system. That’s why it’s important we support efforts to ensure the architecture that sustains Canada’s financial system is robust and resilient.

And, of course, the Bank is a central player in the Canadian Alternative Reference Rate (CARR) working group on benchmark reform. This group was established in March 2018 and includes many key stakeholders from Canada’s financial system.1

In 2020, CARR was tasked with taking a closer look at the Canadian Dollar Offered Rate (CDOR), which is currently the predominant interest rate benchmark in Canada. The group explored how to bolster the robustness and resiliency of Canada’s benchmark regime. This involved analyzing CDOR’s efficacy and making recommendations for the future based on that assessment.

By way of background, CDOR has been around for about 40 years now. It was originally conceived as the basis for pricing lending facilities related to bankers’ acceptances (BAs). It’s a forward-looking term rate that incorporates bank credit. And it has served us well since its inception in the 1980s.

Today, it is administered by Refinitiv Benchmark Services (UK) Limited and is used in more than $20 trillion worth of transactions—or gross notional exposure. Derivatives account for 97% of these exposures, although some also relates to floating-rate notes and loans.

As I just said, CDOR has served us well. But in the first part of CARR’s review process—analyzing CDOR’s efficacy—it became clear that some aspects of CDOR’s architecture could pose risks to its future robustness and resiliency.

One involves the new, higher standards that are expected of critical interest rate benchmarks around the world. These standards, developed by the International Organization of Securities Commissions (IOSCO), provide the goalposts for robust benchmarks.

IOSCO recommends that benchmarks be based on large volumes of underlying arm’s-length transactions. This concept is enshrined in the benchmark rules recently introduced by the Canadian Securities Administrators. But CDOR is set based primarily on expert judgment rather than on transactions.

Another risk is that banks are starting to move away from the BA lending model, which was the basis for the development of CDOR. We are seeing more loans that reference CDOR but do not result in the creation of BAs. When this happens, the BAs that are issued are increasingly being held on balance sheets instead of being sold into the market. The shrinking supply of issued BAs erodes the foundation upon which CDOR is built.

With these issues in mind, CARR considered whether it would be possible to reform or enhance CDOR.

It was determined this wasn’t a tenable option—largely because CDOR, by definition, could not be tied directly to arm’s-length securities transactions without becoming a new rate.

In the end, CARR recommended that Refinitiv stop calculating and publishing CDOR after June 30, 2024. I should note that this is just a recommendation—something that Refinitiv will have to consider and decide upon independently.

CARR also recommended a two-step approach to transition away from CDOR.

The first stage would run until June 30, 2023. During this time, almost all new derivative and securities contracts would migrate away from CDOR and toward CORRA—the Canadian Overnight Repo Rate Average.

CORRA is the other major Canadian interest rate benchmark. It measures the overnight cost of funding general collateral in Canadian dollars, using Government of Canada treasury bills and bonds as collateral in repurchase transactions. As a result, it’s considered an overnight risk-free rate—in line with international best practices. The Bank took over administration of CORRA in June 2020.

For the second phase—between June 2023 and CDOR’s potential cessation date in June 2024—loans would move away from CDOR. This phase would give firms more time to transition their loan agreements and deal with potential issues related to the re-documentation of “legacy” securities.

I want to stress that these recommendations have been unanimously endorsed by CARR members as well as all members of the Canadian Fixed-Income Forum, so they reflect the views of a broad range of CDOR stakeholders. But ultimately, the decision to cease CDOR lies solely with Refinitiv. And I’ll come back to that in a minute.

For now, let’s take a quick look at what may change if Refinitiv phases out CDOR.

As I indicated earlier, the impacts would be largely in the derivatives market. Fortunately, in late 2020, ISDA strengthened the rules that would apply to derivatives if a relevant benchmark was discontinued.2

As we’ve seen in other jurisdictions that are transitioning between financial benchmarks, the lending market would be more complex to transition. Phasing out CDOR would certainly have operational implications for financial institutions and corporations that currently use it when borrowing.

We don’t have all the answers yet in terms of what the financial system might look like after June 2024. For instance, what would happen to the BA lending model that is the foundation of CDOR?

Moving away from CDOR would certainly require effort from all participants in the financial system. So it will be important to hear from those that may be affected by the cessation of CDOR.

To this end, Refinitiv recently launched a consultative process to better understand possible ramifications. I encourage all of you to take part in this. It’s an important way to ensure we are moving forward with benchmark reform in Canada that reflects Canadian realities.

And of course, we can watch and learn from benchmark reform happening elsewhere—like with the London Interbank Offered Rate (LIBOR).

I’m going to conclude my remarks here so that we can spend more time discussing the specifics of CARR’s recommendations—and what they mean for the future.

I look forward to the input from Barbara, Axel, Karl and Tom, and the thoughts and contributions of everyone in attendance today.

I would like to thank Harri Vikstedt and Thomas Thorn for their help in preparing this speech. 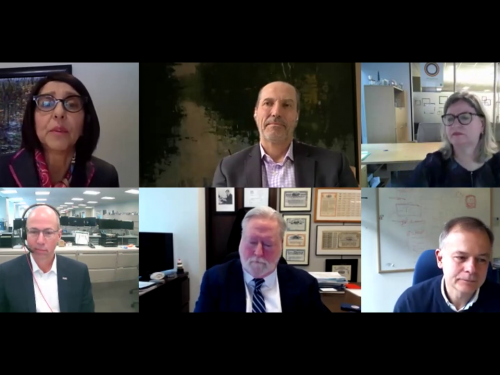