Good morning. Senior Deputy Governor Wilkins and I are pleased to be here to answer your questions about today’s interest rate announcement and our Monetary Policy Report (MPR). Before taking your questions, let me offer a short summary of Governing Council’s deliberations.

It is important that we keep recent developments in context. The Canadian economy was operating close to its potential for most of 2017 and 2018, and inflation is at target as a result. Governing Council is of course preoccupied with the recent slowdown in the economy. If it were to persist, then we would foresee inflation trending below target in the future.

Our belief is that the slowdown of growth to a below-potential pace will prove to be temporary. It is important to understand that many disturbances affect the level of economic activity, and as they work their way through the economy, the growth rate declines. Once adjustment to the disturbances is complete, growth resumes.

Let me apply this idea to the current global situation. All forecasters were expecting the global economy to slow during the latter part of 2018 and into 2019. This is because the US economy had accelerated following fiscal actions, the effects of which would fade during 2019. However, the world economy slowed more than expected in late 2018, and this is persisting into early 2019. Although one can point to a variety of contributing factors, one common factor is trade conflict. This is delaying business investment decisions in many economies and slowing trade further. Once the economy has adjusted, this heightened level of uncertainty will no longer weigh on growth. An escalation of trade conflicts would of course pose a downside risk to the world, but progress in resolving these conflicts would represent an upside risk.

Here in Canada, we are not immune to these global developments. But we also have some issues of our own to deal with. Governing Council focused on four.

First, as discussed in some detail in our MPR in January, Canada’s oil sector remains under considerable stress. Since January, oil prices have firmed, including those prices received by our western producers. But limited access to markets remains a significant source of drag and uncertainty. This has led to another downward revision in investment intentions in the sector. Some of this downgrade is likely more structural in nature, as it represents the continued adjustment of the sector to global oil prices of US$50–60 per barrel, rather than the much higher prices of five years ago. This adjustment process is also being reflected in wages and other costs, and in housing market developments in Alberta. Importantly, as investments in the oil patch are pared back, Canada’s growth slows. But, when those investment levels stop falling, Canada’s growth will pick up, even if oil sector investment does not, as other areas of growth come to dominate the data.

Second, uncertainty about future trade policies has risen again in Canada. We have seen subdued business investment in most sectors for the past two years, but were hopeful that the combination of the signing of CUSMA and the government’s Accelerated Investment Incentive would lead to a pickup in investment. While the overall effect remains to be seen, doubts about the ratification of CUSMA remain a downside risk to our investment outlook. Related to this, exports have started 2019 on a very weak note. Although the data are a bit puzzling, perhaps affected by severe weather, we have taken them at face value in updating our forecast, leaving room for further growth in future months. For both investment and exports, then, we have reason to expect more growth in the second half of 2019.

Third, we have been monitoring developments in the housing market very closely in order to understand how the effects of local tax changes, changes in mortgage guidelines and past rises in interest rates would play out. In part, the analysis is complicated by the adjustment of previously frothy markets—the greater Toronto and Vancouver areas—to a significant revision in price expectations. Many other markets across the country—such as Halifax, Montreal, Ottawa and Winnipeg—are seeing solid activity. This is what would be expected in an economy that is growing, with rising population and a strong labour market. This means that as the situation stabilizes in Toronto and Vancouver, the Canadian housing sector should return to growth overall later this year. On top of this, mortgage rates have eased in the wake of a drop in global bond yields. Related to this, home furnishings and renovations were two bright spots in an otherwise dim picture for retail sales at the start of the year. It is worth noting that the retail data may also have been affected by severe weather.

Fourth, there have been several fiscal announcements since our last Report. Initiatives taken at the federal level and in Quebec and British Columbia will add to Canada’s GDP growth. However, the lowering of projected government spending in Ontario is sufficient to more than offset all of these, so that fiscal policy now represents a net downward revision to our growth outlook for 2020, of about 0.2 percentage points.

Governing Council is of the view that monetary policy needs to maintain a degree of accommodation sufficient to offset these various headwinds until the economic outlook improves. The economy has slowed and some excess capacity has re-emerged, although this excess capacity is not generalized across the entire economy. Indeed, the service sector remains very strong and is creating many new jobs, and there continue to be a lot of job vacancies. Furthermore, global and Canadian financial conditions have eased a good deal since our January Report. For example, five-year fixed mortgage rates have declined by more than 60 basis points. All of this suggests that there is good reason to believe that the economy will pick up in the second half of the year.

Governing Council therefore believes that this positive outlook is consistent with the current interest rate setting. In our rate decision, we chose to remove the reference to the need for interest rates to return into a neutral range, which we have revised to 2.25–3.25 per cent. We had originally added this reference to neutral to remind people what policy normalization could look like. In the current situation, we feel it is important to emphasize that we will continue to evaluate the appropriate degree of monetary policy accommodation as new data arrive. In particular, we are monitoring developments in household spending, oil markets, and global trade policy to gauge the extent to which the factors weighing on growth and the inflation outlook are dissipating. 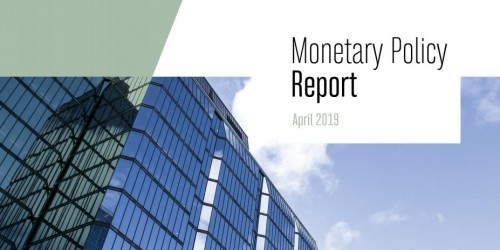 Media Relations Ottawa, Ontario
The Bank of Canada today maintained its target for the overnight rate at 1 ¾ per cent. The Bank Rate is correspondingly 2 per cent and the deposit rate is 1 ½ per cent.
Content Type(s): Press, Press releases
April 24, 2019 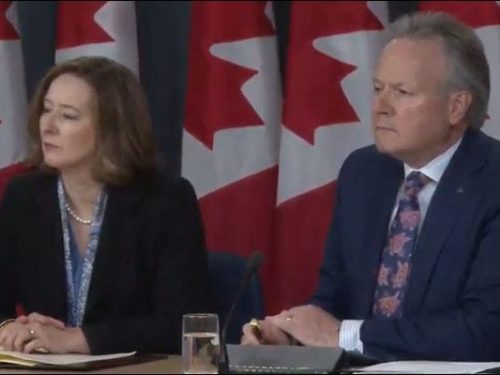