In remarks to UBC’s Vancouver School of Economics and CFA Society Vancouver, Wilkins highlighted trouble spots of particular concern arising from elevated household, government and corporate debt in different places around the world.

“Whether you are a homeowner or a businessperson, you know first-hand that high leverage can leave you in a vulnerable financial position,” Wilkins said. “It’s no different for economies.”

Wilkins pointed to a number of ways in which important safeguards have been put in place and, in some cases, strengthened since the global financial crisis. The Basel III reforms mean that globally active banks are better capitalized, hold more liquid assets and run their businesses with less leverage. China has embarked on more stringent regulation and supervision of its financial sector. As well, continued economic growth and sound macroeconomic policies will make public debt loads more sustainable.

“The global financial system is in a better place than it was in 2007 in many ways,” Wilkins noted. “That said, more needs to be done to further reduce the downside risks.”

Top of her list was finding a long-lasting resolution to the current trade war given that “the conflict is threatening growth around the world right now.” Wilkins also endorsed stress tests for banks and extending this work to non-bank financial institutions, such as asset managers. Regulators should keep macroprudential and other tools up to date to address localized vulnerabilities. Individual borrowers should also do their own stress tests to see whether their debt burdens are sustainable.

“Credible fiscal and monetary policies, and nimble financial system safeguards, are at the core of limiting vulnerabilities and promoting longer-term resilience for all countries,” Wilkins concluded.

The Age of Leverage 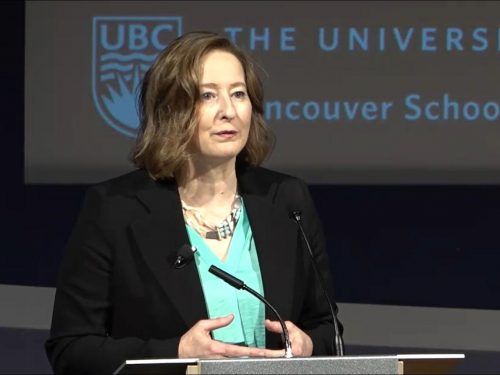