Good morning. I am pleased to be here to answer your questions about today’s interest rate announcement and our Monetary Policy Report (MPR). Before taking your questions, let me offer a short summary of Governing Council’s deliberations.

A lot has happened since our last MPR in October. For one thing, the US-led trade war is beginning to have negative economic consequences. Global financial markets have reacted—bond yields have fallen, yield curves have flattened even more and stock markets have repriced significantly. Here in Canada, lower oil prices have reached the point where they will have material consequences for our macroeconomic outlook. And, our housing sector is taking longer than expected to stabilize.

It is natural to focus on the latest fluctuations in the economic data. But Governing Council also spent a good deal of time reviewing our starting situation to ensure that these new developments are put into appropriate context.

Is the world economy moderating? Yes: this has been in our forecast for some time. The US economy has been growing well above potential because of fiscal stimulus. Our estimates, as shown in Chart 1 of the MPR, show that US private sector economic growth has been slowing since early 2018 and will continue to slow this year. China’s economy has also been transitioning to a more sustainable pace of growth, and recent policy actions are an attempt to counter the effects of its trade conflict with the United States. In fact, the adverse effects of tariffs on growth are beginning to show up in the world economy as a whole. Our forecast is for global growth of 3.4 per cent in 2019—the same figure we had in October—but this is a material moderation from 3.7 per cent in 2018.

Is the Canadian economy moderating? Yes: 2017 was a very strong year with 3 per cent growth, which is well above our potential. Back in October, we were expecting about 2 per cent for 2018 and about the same for 2019. The economy has been operating essentially at its full capacity for about 18 months now, and inflation has been running on target. The labour market has been performing well—not as strong as in 2017, but very solid nonetheless—and unemployment is as low as we have ever seen it.

Just last Friday we received the December employment report, with a rise of 9,000 jobs—not an extraordinary number, but solid. However, notice that there were 17,000 jobs lost in Alberta alone, no doubt due to the recent drop in oil prices. This means that the rest of Canada saw a net rise of 26,000 jobs in December, which is very encouraging. Despite the strong labour market, however, we have seen persistent subpar wage growth. We have offered a couple of new insights on that in today’s MPR. Quite simply, adjustment to the 2014 oil price decline continues to hold back wages in oil-producing regions. Elsewhere the picture is brighter. Just to illustrate: as shown in Chart 8 of the MPR, the Bank’s preferred measure of wage growth rose by 1.8 per cent in oil-producing provinces in the third quarter. In the rest of Canada, that figure was a more robust 2.6 per cent.

This trend is likely to continue as we are seeing renewed weakness in global oil prices, which are about 25 per cent lower than in October. This means that Canada is earning less income from the rest of the world. Of course, the biggest impact is in oil-producing provinces, but those incomes are spent on products produced everywhere in Canada, so eventually the impact is felt more broadly.

Why are world oil prices falling? The supply of oil has been outpacing demand, and some two-thirds of the increase in global production over the past year has been in the United States. US production, and the capacity to deliver to market, increased by about 2 million barrels per day during 2018. At the global level, the job of bringing supply back in line with demand is falling to OPEC, so it remains to be seen if oil prices will remain as weak as they have been.

Here in Canada, the situation has been made more difficult because Western Canadian oil prices have been depressed even more than global prices. Production has been outpacing our ability to deliver oil to foreign markets. The announcement of mandated production cuts for 2019 caused an immediate correction in domestic prices. This means that, even as our prices return to their normal relationship with global prices, Canada earns less because of lower global prices and because of lower production.

Based on what we know today, the impact on our economy is estimated to be about one-fourth the size of the 2014–16 episode. The price drop is much smaller, the oil-producing sector is smaller, and our oil producers have improved operating efficiency considerably over the past three years. The Canadian dollar has declined with oil prices, helping to buffer the effects. All other things equal, lower oil prices mean approximately 0.5 per cent less GDP by the end of 2020, according to our models. By convention, we use current oil prices in our projection, but there is considerable uncertainty about future oil prices and their effects.

Governing Council also talked a lot about the Canadian housing market, which is taking longer to stabilize than we expected. This may be because of the various municipal or provincial measures that have been taken. Or it may be that the economy is more sensitive to the combined effects of the new mortgage underwriting guidelines and higher interest rates. Homebuyers are adapting by seeking smaller, lower-priced homes; home sellers are offering lower prices; and home builders are adapting to a growing demand for smaller homes. These adjustments are taking time, so we need to continue to monitor the situation carefully. But we must keep in mind that the markets in Toronto and Vancouver were exhibiting a degree of froth, and it is always difficult to judge where the market will stabilize once froth has been removed.

Taken together, the revisions to our outlook point to a downgrade in growth for 2019 to about 1.7 per cent, from 2.1 per cent previously. This results in a modest reduction in our forecast for inflation for 2019, but we expect to be back at 2 per cent by the end of this year. Weighing all of these factors, Governing Council continues to judge that the policy interest rate will need to rise over time into a neutral range to achieve the inflation target.

We are fully cognizant of the negative signals being given by financial markets. We believe that equity and bond markets are priced for downside risks and acknowledge these risks in our MPR. The trade war is already having negative consequences globally and these will continue to grow if the situation is not resolved, especially if it escalates. However, we remain of the view that this risk is two-sided—while this dispute could escalate it could also be resolved—and therefore we must take into account both possibilities in managing the risks faced by the Canadian economy.

As today’s decision to keep our key policy interest rate unchanged illustrates, we are decidedly data dependent and will adapt our inflation outlook and interest rate profile to developments as they unfold. The appropriate pace of rate increases will depend on how the outlook evolves, with a particular focus on developments in oil markets, the Canadian housing market and global trade policy.

With that, I will be happy to take your questions. 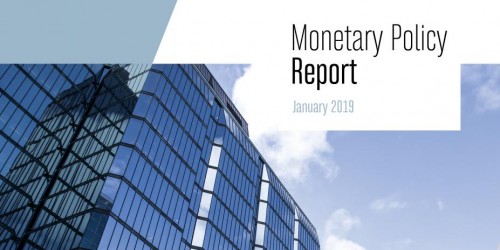 The Bank projects that Canadian economic growth will slow to 1.7 per cent this year before rebounding to 2.1 per cent in 2020.

Media Relations Ottawa, Ontario
The Bank of Canada today maintained its target for the overnight rate at 1 ¾ per cent. The Bank Rate is correspondingly 2 per cent and the deposit rate is 1 ½ per cent.
Content Type(s): Press, Press releases
January 9, 2019 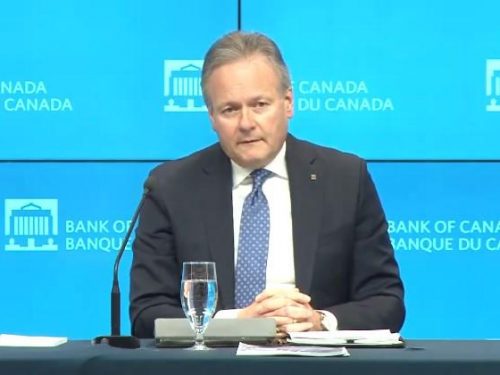