It can be a challenge for central banks to reconcile their views of the economy with signals from financial markets, but the effort is worthwhile, Bank of Canada Governor Stephen S. Poloz said in a speech today.

Differences between financial market action and a central bank economic forecast can often be reconciled with time, since economic data arrive with a lag and markets react to events as they occur, Governor Poloz told the Canada–UK Chamber of Commerce. “The fact that financial market prices are formed with the discipline that comes from putting real money on the line means that central bankers ignore them at their peril,” he said.

The most important signal that financial markets are now sending is the reversal of the long-standing trend toward low bond yields, Governor Poloz said. “A decade of massive monetary policy intervention is finally taking the risk of deflation off the table,” he said. “Higher bond yields may reflect that the market is becoming two-sided again,” so investors can no longer expect yields to be suppressed by extraordinary monetary policies.

Higher bond yields have implications for other financial markets, including stock markets. If investors start to discount expected earnings with higher interest rates, the price they are willing to pay for a given stock will fall, the Governor said. As the global economy goes through a transition period when central banks withdraw extraordinary liquidity, “it is logical to expect stock prices to retrace some of their earlier increases and to exhibit a more normal level of volatility.”

Governor Poloz also described how financial market signals are consistent with the Bank’s views about the risks facing the global economy. The stocks and debt of companies most exposed to international trade actions have been underperforming other sectors, he said.

The preoccupation of investors with the downside risks associated with international trade actions, both actual and threatened, is understandable, “but we must not lose sight of the fact that trade risks are two-sided,” he said. “Rather, the Bank of Canada must attempt to weigh both the upside and downside risks and take a middle, risk-balanced path.” 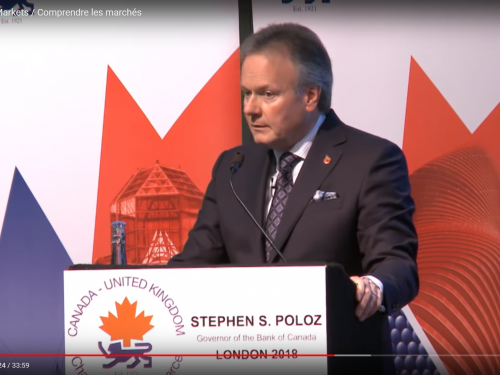 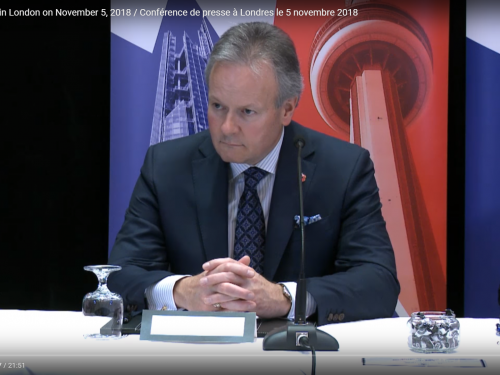