The Bank of Canada today increased its target for the overnight rate to 1 1/4 per cent. The Bank Rate is correspondingly 1 1/2 per cent and the deposit rate is 1 per cent. Recent data have been strong, inflation is close to target, and the economy is operating roughly at capacity. However, uncertainty surrounding the future of the North American Free Trade Agreement (NAFTA) is clouding the economic outlook.

The global economy continues to strengthen, with growth expected to average 3 1/2 per cent over the projection horizon. Growth in advanced economies is projected to be stronger than in the Bank’s October Monetary Policy Report (MPR). In particular, there are signs of increasing momentum in the US economy, which will be boosted further by recent tax changes. Global commodity prices are higher, although the benefits to Canada are being diluted by wider spreads between benchmark world and Canadian oil prices.

Consumption and residential investment have been stronger than anticipated, reflecting strong employment growth. Business investment has been increasing at a solid pace, and investment intentions remain positive. Exports have been weaker than expected although, apart from cross-border shifts in automotive production, there have been positive signs in most other categories.

Looking forward, consumption and residential investment are expected to contribute less to growth, given higher interest rates and new mortgage guidelines, while business investment and exports are expected to contribute more. The Bank’s outlook takes into account a small benefit to Canada’s economy from stronger US demand arising from recent tax changes. However, as uncertainty about the future of NAFTA is weighing increasingly on the outlook, the Bank has incorporated into its projection additional negative judgement on business investment and trade.

The Bank continues to monitor the extent to which strong demand is boosting potential, creating room for more non-inflationary expansion. In this respect, capital investment, firm creation, labour force participation, and hours worked are all showing promising signs. Recent data show that labour market slack is being absorbed more quickly than anticipated. Wages have picked up but are rising by less than would be typical in the absence of labour market slack.

While the economic outlook is expected to warrant higher interest rates over time, some continued monetary policy accommodation will likely be needed to keep the economy operating close to potential and inflation on target. Governing Council will remain cautious in considering future policy adjustments, guided by incoming data in assessing the economy’s sensitivity to interest rates, the evolution of economic capacity, and the dynamics of both wage growth and inflation.

The next scheduled date for announcing the overnight rate target is March 7, 2018. The next full update of the Bank’s outlook for the economy and inflation, including risks to the projection, will be published in the MPR on April 18, 2018. 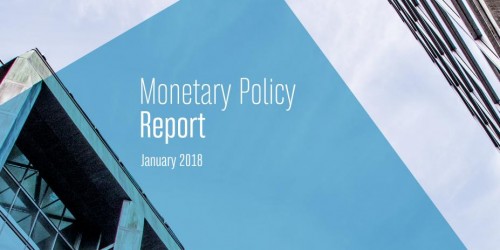 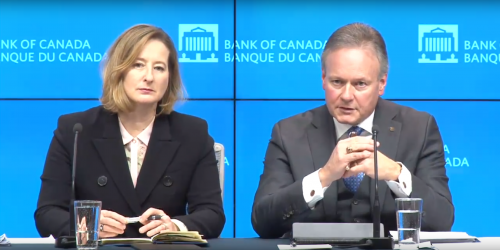 Senior Deputy Governor Carolyn A. Wilkins discusses key issues involved in the Governing Council’s deliberations about the policy rate decision and the MPR.