Good morning. Senior Deputy Governor Wilkins and I are pleased to be back to answer your questions about today’s interest rate announcement and our Monetary Policy Report (MPR). I will start with a few remarks about the most important issues in the Governing Council’s deliberations.

The Canadian economy continues to work its way back from the post-crisis global recession and the associated collapse in our exports while, at the same time, is adjusting to lower prices for oil and other commodities as well as a much lower exchange rate. Throughout this process, household financial vulnerabilities have continued to build. So perhaps it should not be surprising that the data have been less than clear as to which economic forces are dominant.

Canadian exports have been particularly variable, and a revised export forecast was central to our deliberations. Even though exports of goods have more than fully recovered from their dramatic plunge in 2007–09, that recovery has persistently lagged our forecasts. The strong export performance of 2015 gave us new confidence, but this was shaken again in the first half of this year when we experienced a sharp decline over five months.

In our July MPR we advanced what we viewed as a conservative forecast for exports, in the sense that it assumed only that exports would grow roughly in line with the US economy. We have seen a significant recovery in exports since then, but the net effect of these choppy data is that the level of exports is well below where we thought it would be by now.

It is important to note that international trade has been surprisingly weak globally, and we offer a box in this MPR discussing a range of interpretations. Also, the US economy was quite weak in the first half of the year in dimensions that are important to Canadian export demand. These factors explain about half of the shortfall in exports relative to what we were expecting. For the remainder, we are examining a range of structural factors, including lost export capacity and competitiveness challenges.

In our surveys, companies have mentioned a number of factors that can influence competitiveness or hinder exports directly. These include deficient infrastructure, regulatory uncertainty, rising trade barriers, relatively high electricity costs, and the unknown status of current and future trade agreements.

This analysis suggests that more of our export shortfall may be structural than previously believed, rather than cyclical. This is what led us to indicate in our September decision that the risks around our July inflation projection were tilted to the downside. Our latest projections incorporate a permanent shortfall in exports relative to our understanding of fundamentals in order to rebalance our forecast risks, reducing the projected level of GDP by about 0.6 per cent by the end of 2018 compared with July. Our research on this subject will continue.

The second major issue in our deliberations was the federal government’s recent move to strengthen mortgage markets. This is a welcome development, as it will mitigate financial vulnerabilities over time. We expect it to reduce housing resales in the near term, and perhaps cause a shift toward the construction of smaller homes, which together will shave some spending in the economy. Although this effect is very uncertain, we have incorporated a shock of minus 0.3 per cent by the end of 2018, which is about half of our revision to the export outlook.

As you know, the Bank thinks of these issues within a risk-management framework. This framework acknowledges that economic forecasting brings with it inherent uncertainty around the outlook for inflation, and financial developments bring uncertainties around the implications for financial stability. Together, these factors generate a zone within which variations in either inflation-outlook risks or financial stability risks may be tolerated. The width of this zone is a function of the underlying uncertainties. For example, in the current context, the government’s new mortgage rules should mitigate financial stability risks over time, thereby improving the risk trade-offs we face within this zone.

After incorporating our new thinking around exports, and taking into account the possible near-term effects on house resales of the new mortgage rules, our projections show a lower profile for economic growth, an extended period of economic slack, and a later return of inflation to the 2 per cent target. Notice that when we say in our statement that we now consider the risks around our new inflation projection to be balanced, we are referring to projection risks, not to the performance of inflation relative to target. In our forecast, inflation will still trend below target so long as the economy is below full capacity, and we now project that to last longer than we did in July. Further extending the time during which the economy operates with excess capacity has multiple undesirable implications, such as discouragement of workers and labour-market scarring.

Given the downgrade to our outlook, Governing Council actively discussed the possibility of adding more monetary stimulus at this time, in order to speed up the return of the economy to full capacity. However, we identified a number of significant uncertainties in the current context that are serving to widen the zone of balance within our risk-management framework. These include: the macroeconomic effects of the new mortgage rules; the likely path of our exports; the impacts of the federal government’s fiscal measures, which are just beginning to be felt; and the effects on business confidence of the US election.

Importantly, the government’s actions to mitigate risks in the mortgage market were not seen as an impediment to easier monetary policy. Indeed, a combination of lower interest rates and more stringent macroprudential policy would likely work to reduce both financial stability risks and the risk of an undershoot of inflation at the same time. This is because interest rate changes have their largest effect on inflation risk, while stronger macroprudential settings will lead to a higher quality of household indebtedness over time.

Against this backdrop, Governing Council decided to leave our key policy interest rate unchanged, as we judged that the balance of risks at present are still within the zone for which the current policy setting remains appropriate. This judgement will be monitored carefully as more data become available and more clarity emerges around these uncertainties.

Thank you for your attention. Now, Carolyn and I would be happy to take your questions. 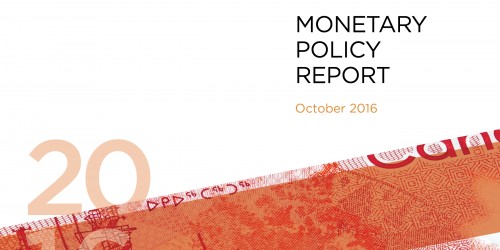 Media Relations Ottawa, Ontario
The Bank of Canada today announced that it is maintaining its target for the overnight rate at 1/2 per cent. The Bank Rate is correspondingly 3/4 per cent and the deposit rate is 1/4 per cent.
Content Type(s): Press, Press releases
October 19, 2016 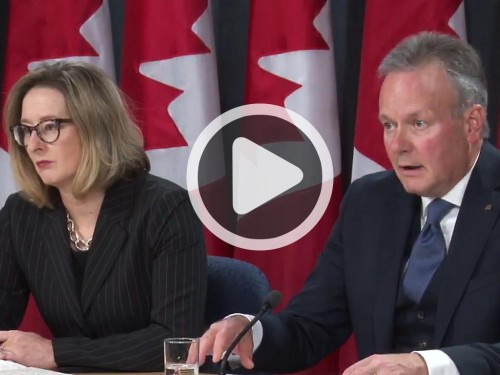