Economies around the world have become more integrated because of increased trade, and this has implications for the conduct of monetary policy, Bank of Canada Governor Stephen S. Poloz said today.

In the first annual Paul Storer Memorial Lecture on Canada–US relations, given at Western Washington University, Governor Poloz said that the evolution of international trade practices, such as building global value chains and establishing foreign affiliates, suggests that economies are becoming more integrated.

There is “evidence of increased trade integration when the definition of trade is broadened to embrace all the dimensions of international business,” Governor Poloz noted. This evidence “is sufficient for monetary policy to take it seriously.”

Increasing integration has been driven not only by pacts such as the North American Free Trade Agreement but also by the rising trade penetration of emerging markets, particularly China, through the development of global supply chains, Governor Poloz said.

Cross-border integration can matter for monetary policy in several ways, the Governor said. In particular, increased integration can affect the economic models that policy- makers rely on, reducing the economy’s sensitivity to exchange rate fluctuations while making domestic inflation more dependent on international developments. Analysis produced using the Bank of Canada’s main policy model shows that maintaining inflation targets can be more challenging when integration is high, because it may require more variability in interest rates, the exchange rate and the output gap for the same series of macroeconomic shocks.

“Models that do not recognize rising integration are likely to predict that monetary policy actions will be more effective at stabilizing the economy and controlling inflation than they will prove to be in practice,” Governor Poloz stated. “Policy-makers need to acknowledge that international developments will have an influence on their economies.”

The lecture honours the late Paul Storer, former economics professor at Western Washington University who worked with Governor Poloz at the Bank of Canada. Professor Storer, who died last year, specialized in the study of the economic relationship between Canada and the United States, particularly with respect to trade. 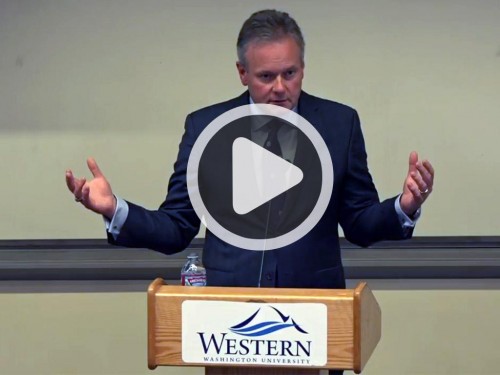