Good morning. Governor Poloz and I are pleased to be here to talk about today’s interest rate announcement and our Monetary Policy Report (MPR). Before turning to your questions, let me spend a few minutes highlighting the main points of discussion that took place within Governing Council.

Our bottom line is that the underlying forces that underpin stronger growth in Canada are intact, and the adjustment of the economy to lower oil prices is well under way. That said, both international and domestic factors have led us to revise down our forecast for GDP growth.

Most importantly for Canada, there is good underlying momentum in the US economy, even if the composition of US growth is somewhat less favourable for Canada than it was in April. We are seeing relatively strong labour market conditions in the United States, consumers are confident, and the rate of new firm creation is back near pre-recession levels. All of this suggests that the weak start to 2016 was largely temporary. The US economy remains a key driver for global growth, which we forecast will strengthen gradually to 3 1/2 per cent by 2018. However, the results of the referendum in the United Kingdom have clouded the global outlook.

Governing Council carefully considered how best to incorporate the effects of the Brexit vote into the outlook. It is early days, and there will be a prolonged period of uncertainty as authorities work out how the United Kingdom will exit from the European Union. Governing Council decided to incorporate in the base case projection a 0.2 per cent reduction in the level of global GDP by the end of 2018. This reflects direct trade effects and some confidence effects on business investment. We are assuming that the Brexit process will proceed in an orderly fashion. Financial markets were resilient despite sharp adjustments in a wide range of global asset prices in the wake of the vote, and financial conditions are generally more accommodative.

Now let me turn to the Canadian economy. Our discussions focused on how we should look through the choppiness in recent data to see the underlying trends, and what these trends mean for the inflation outlook. Among other factors, the fires in Northern Alberta, which have been costly for many, represent a sharp, but temporary, hit to the economy. We expect to see GDP fall by 1 per cent at annual rates in the second quarter, and then grow by 3.5 per cent in the third quarter as oil production resumes, rebuilding around Fort McMurray begins and the new Canada Child Benefit lifts consumption. In fact, fiscal measures, including infrastructure spending, provide an important support to growth over the forecast horizon.

We have always said that the adjustment to the oil price shock would be a complex process. And we see evidence that these adjustments are happening, thanks to the resiliency and flexibility of the Canadian economy. On the energy side, firms have been quick to cut back investment plans and reduce costs. By the end of the year, we expect these reductions to be largely over.

On the non-commodity side of the economy, we have also seen evidence of adjustment, but it has been more uneven. Export data have been particularly volatile, and it is very important for us as policy makers to assess underlying trends. What we see is that non-commodity exports over the past couple of years have been responding largely as expected to growth in foreign activity and the Canadian dollar. Businesses are telling us that they are benefiting from stronger demand and a lower dollar. We have a great chart in the MPR that shows that non-commodity exports have recovered almost to their pre-recession peak, which puts the recent volatility into proper perspective. Exports are projected to grow in line with the US economy over the projection period. We are being conservative by assuming that exports only make up part of the ground lost over the past four months. The past depreciation of the exchange rate will continue to support the level of exports, but its effect on export growth is projected to taper off over the course of this year.

Growing demand for Canadian exports should lead to increased investment and new businesses being created. The question for monetary policy is when and by how much. Governing Council still believes that investment will be needed to expand productive capacity as both foreign and domestic demand increase. You can see that this rebuilding process is well under way in the United States, and we are seeing early signs that new firms are also being created in Canada. That said, our profile for investment, while still positive, is lower than in April. That is because investment data have continued to disappoint and some businesses are telling us that they remain cautious.

Let me make a point about the lower investment profile. It does not just mean slower growth in GDP, it also means a reduction in the economy’s potential, although to a lesser extent. When you add it all up, we project the output gap will close toward the end of 2017, somewhat later than we forecast in April. The uncertainty around potential output remains high because it is not clear how much productive capacity will ultimately be rebuilt as the economy strengthens.

In terms of inflation, we project it will average 2 per cent in 2017, as the output gap gradually closes. Our judgment about the inflation process is supported by two staff papers published today. The first finds that wage pressures are subdued relative to historical experience, largely consistent with the existing slack in the labour market. The second focuses on structural factors that help explain recent movements in the prices of consumer energy products, food and services.

Finally, as usual, we see a number of risks to our inflation outlook. We judge these risks to be roughly balanced. The overall climate, however, is one of heightened uncertainty. In a context of continued weak investment at the global level, any additional uncertainty has the potential to keep businesses on the sidelines longer.

Not surprisingly, Governing Council also spent some time talking about housing. We continue to have the same concerns that we expressed in our June Financial System Review about household indebtedness and housing, particularly in the Greater Vancouver and Toronto markets.

The circumstances that the Canadian economy is facing make the Bank’s risk-management approach to monetary policy particularly valuable, because the types of uncertainties we see cannot readily be incorporated into projections. In light of all these considerations, the Governing Council maintained the target for the overnight rate at 0.5 per cent.

With that, Governor Poloz and I would now be happy to answer your questions. 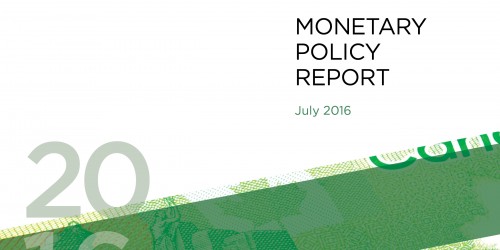 Canadian economic growth is projected to accelerate from 1.3 per cent this year to 2.2 per cent in 2017.

Media Relations Ottawa, Ontario
The Bank of Canada today announced that it is maintaining its target for the overnight rate at 1/2 per cent. The Bank Rate is correspondingly 3/4 per cent and the deposit rate is 1/4 per cent.
Content Type(s): Press, Press releases
July 13, 2016 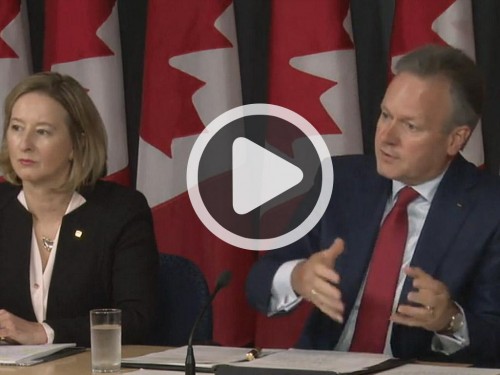