The mix of monetary and fiscal policies in an economy has important implications for debt levels and financial stability over the medium term, Bank of Canada Governor Stephen S. Poloz said today.

In the Doug Purvis Memorial Lecture given at the Canadian Economics Association’s annual conference, Governor Poloz used the Bank’s main policy model to construct three “counterfactual” scenarios of events from the past 30 years that show how different policy mixes can influence the amount of debt taken on by the private and public sectors.

Tight monetary policy with easy fiscal policy may lead to the same growth and inflation results as easy monetary policy paired with tight fiscal policy in a given situation, the Governor explained. However, the consequences for government and private sector debt levels would be quite different.

The Governor stressed that the counterfactuals are intended to illustrate the impact of the policy mix on debt levels; they aren’t meant to be taken as an opinion about what the best policy mix was in the past or is now.

“Hindsight is always 20:20 and such a discussion would have little meaning,” Governor Poloz said. “The best mix of monetary and fiscal policy will depend on the economic situation.”

There should be a degree of coordination between the monetary and fiscal authorities that allows both to be adequately informed of each other’s policies and consider their implications on debt levels over the medium term, the Governor said. In Canada’s case, the central bank operates under an explicit inflation-targeting agreement with the federal government that enshrines its operational independence, while allowing for both parties to share information and judgment, Poloz said. This framework represents “a simple yet elegant form” of policy coordination, he noted.

The lecture honours Doug Purvis, a Canadian macroeconomist and Queen’s University professor. In 1985, Purvis delivered the Harold Innis Lecture, in which he argued that rising government debt levels would eventually compromise the ability of authorities to implement stabilization policies. Governor Poloz said his lecture today is meant to build on Purvis’ initial insights by bringing more advanced macroeconomic models to bear on the topic, and linking them to the topical issue of financial stability. 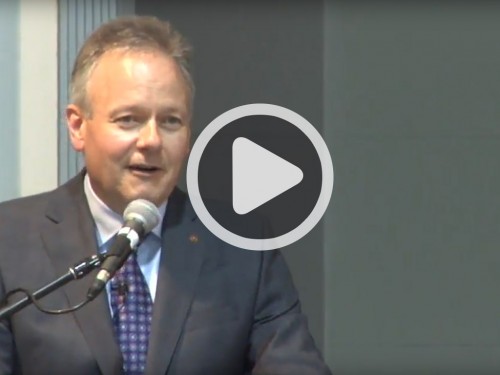