Good morning. It’s a pleasure for Senior Deputy Governor Wilkins and me to be with you today to talk about the December issue of the Bank’s Financial System Review (FSR), which we published this morning.

Let me take a moment to give some context for this report. The FSR highlights key financial vulnerabilities and some potential triggers that could turn those vulnerabilities into risks to the stability of Canada’s financial system. The FSR is an essential complement to our Monetary Policy Report—together, these two reports give the basis for a complete discussion of monetary policy within our risk-management framework.

At our last interest rate announcement, we kept our key policy rate unchanged, as the economy was unfolding reasonably in line with our latest projection in October. We also said that risks to financial stability were evolving as expected. Today’s FSR provides the analysis behind that assessment.

Our interest in financial stability risk has grown since the financial crisis, for two distinct reasons. First, the global regulatory architecture has been strengthened to prevent future crises, and how the system adapts to those changes needs to be well understood. Second, persistently very low interest rates in response to the crisis are fuelling new financial vulnerabilities that bear constant monitoring.

Let me start with the financial stability implications of new regulations for financial intermediaries. The global financial system is clearly safer than it was before the crisis. This is important, for it means that vulnerabilities that appear worrisome today need to be assessed against a more resilient system.

At the same time, our financial system is adapting to new regulations, and we must be alert for any new vulnerabilities that might emerge as a result. As one example, some observers contend that new capital and liquidity rules have led to reduced market-making in secondary fixed-income markets and may also be responsible for occasional liquidity shortfalls and market gaps. We analyze this vulnerability in greater depth in today’s FSR.

In fact, it is proving very difficult to assess the liquidity issue empirically. Most of the available data suggest that government-bond liquidity may have improved in recent years, but these data tell only part of the story. The Bank recently established the Canadian Fixed-Income Forum to enable a continuing dialogue, and we’ve modified our operations to help alleviate some of these issues. The Governing Council believes it’s important to continue studying the matter, not just as it pertains to government bonds, but also to other asset classes. Given the new regulatory architecture, we may not know just how resilient market liquidity is until there’s a true stress event.

Let me now turn to vulnerabilities being created by persistently very low interest rates in Canada. The post-crisis situation has quite naturally fuelled the accumulation of household debt, as well as heightened activity in the housing sector. We can observe other elements of risky financial behaviour, but these two vulnerabilities have been our main focus for some time and have continued to grow in importance since our last FSR.

In terms of household debt, income growth hasn’t kept pace with increases in borrowing, since mortgage growth continues to rise. More borrowing was expected, given the reductions in our policy interest rate earlier this year. It’s important to remember that while rate reductions have increased vulnerabilities at the margin, they’ve also mitigated the risk to the financial system by helping offset the decline in incomes and employment tied to the drop in commodity prices.

Our analysis shows that there has been an increase in the number of highly indebted households in Canada, by which I mean those whose debts are more than 350 per cent of their annual gross income. Not only are there more of these highly indebted households, they also carry a growing share of household debt. These people are more likely to live in British Columbia, Alberta or Ontario, where house price gains have been the largest. The Governing Council’s reading of the situation is that these vulnerabilities are quite highly concentrated—about 720,000 households fall into this vulnerable category.

In terms of the housing market, we continue to see regional markets evolving along different tracks, as we’ve indicated before. Activity in the energy-producing regions of Alberta, Saskatchewan, and Newfoundland and Labrador has declined noticeably, which was expected following the decline in oil prices. The housing markets of Toronto and Vancouver have seen renewed momentum, driven by stronger employment growth and migration, both interprovincial and international.

The Governing Council’s base-case scenario continues to be a constructive one: housing activity should stabilize in line with economic growth as the driver of growth in the economy switches from household spending to non-resource exports. However, recent momentum in prices in Toronto and Vancouver may increase the likelihood of a correction in house prices, which could affect vulnerable households. Unsurprisingly, house prices are correcting in oil-producing regions.

As in the past, we have illustrated how certain triggers could turn these vulnerabilities into full-blown risks to the Canadian financial system. Risks assessed in this FSR are (1) a severe recession that would reduce households’ ability to service their mortgages and cause a broad correction in house prices; (2) an unexpectedly sharp rise in global risk premiums that could spill over to the cost of domestic financing; (3) economic or financial stress emanating from China and other emerging markets; and (4) more downside risk in resource pricing. These risks are not meant to be exhaustive but rather are used to illustrate the potential consequences of the vulnerabilities we have identified. Other possible triggers might include a large-scale credit event in the global resource sector or a sovereign credit event, for example.

The Governing Council acknowledges that certain vulnerabilities are still edging higher, but the overall level of risk they pose to the Canadian financial system has remained roughly unchanged since our June report. In this regard, recent changes by Canadian authorities to the rules for mortgage financing will help to mitigate these risks as we move into 2016.

Finally, I’d note that the FSR features reports that take a close look at aspects of the Canadian and global financial systems. With this issue, there’s a report that analyzes the microdata related to household debt, as well as a review of mortgage securitization in Canada. These are very important and useful reports, and I hope you’ll take the time to read them. 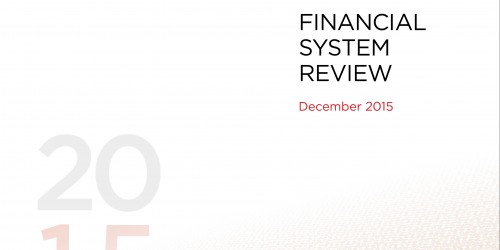 The Reports section of the Financial System Review examines selected issues of relevance to the Canadian and global financial systems. The December 2015 issue features two reports on significant developments in the financial system related to household finances: the importance of residential mortgage securitization for Canadian housing finance and the changing patterns of indebtedness of Canadian households. 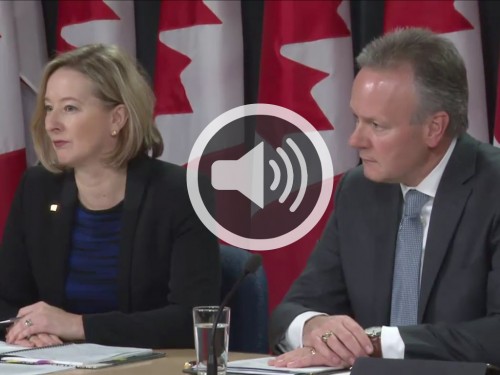