Good morning. Senior Deputy Governor Wilkins and I are happy to be here with you again to answer your questions about today’s interest rate announcement, and our latest Monetary Policy Report (MPR). Let me begin with a few remarks around the issues that were most important to the Governing Council’s deliberations.

Since our last MPR in April, global economic developments have been quite disappointing, and these have led to a significant downgrade of our estimate of Canadian economic growth for 2015. There were three factors behind this downgrade:

First, Canadian oil producers have lowered their long-term outlook for global oil prices, and have cut their plans for investment spending significantly more than previously announced.

Second, China’s economy is undergoing a structural transition to slower, domestic-driven growth, which is reducing Canadian exports of a range of other commodities.

Third, Canada’s non-resource exports have also faltered in recent months. While this is partly due to the first-quarter setback in the U.S. economy, it’s still a puzzle that merits further study.

Given the collapse in oil prices, and declines in some other key non-energy commodities, the economy is now operating on two distinct growth tracks: the resource track and the non-resource track. These tracks are not independent —the cancellation of an investment in the oil patch will often lead to a hit in the manufacturing sector, for example. But we can do some rough decompositions to illustrate the situation. I draw your attention to Chart 18, on page 19 of the MPR. There we can see the sharp drop in oil and gas output, which constitutes 10 per cent of our economy, and the slowdown in non-energy commodity production, which represents a further 8 per cent. The remaining 82 per cent is seeing steady growth, although it has moderated slightly so far this year, due to the setback in the U.S and spillovers from the resource sector.

As the non-resource track regains momentum, it is expected to become the dominant trend at the aggregate level. We expected this to begin in the second quarter. But it did not, because of the three factors I listed above.

A major shift in a country’s terms-of-trade is one of the most complex situations an economic forecaster can face. We have said from the beginning that while there would be both negative and positive effects from lower oil prices on Canada, the negative effects would dominate, and they would come first. The positives would be more gradual, taking the form of stronger consumer spending, both here and in the U.S., and increased non-resource exports, because of stronger U.S. spending and a lower Canadian dollar.

These positives have been slow to emerge, but we can see them working. Export sub-sectors that are usually sensitive to exchange rate movements have been outperforming. The setback in the U.S. economy appears to have been mainly temporary, as U.S. labour market performance has been strong. In Canada’s non-resource sector, the labour market has been performing well, and our conversations with companies indicate rising capacity constraints. This implies that increased investment and more employment gains are likely in the months ahead. In short, we expect these positive trends to begin to outweigh the negatives coming from the resource sector during the next few months.

These considerations figured prominently in the Governing Council’s deliberations, because the state of total demand in the economy relative to our production capacity is what drives our inflation outlook. The economy has been operating below full capacity for some time, which is why we estimate that the underlying trend in inflation is running at around 1.5 per cent to 1.7 per cent. Core inflation is higher than the underlying trend, because a decline in the dollar is raising the prices of imports. Total inflation is much lower, because of past declines in fuel prices. As the temporary effects dissipate, all these measures of inflation will converge on the underlying trend.

The weak economic performance in the first half of this year means that Canada has more excess capacity, which is increasing the downward pressure on the underlying trend in inflation. To put it in the language of our risk management framework, the three factors I mentioned earlier moved us out of the neutral zone, to a place where the downside risk to future inflation is material. This would imply a slower return to full economic capacity and sustainable 2 per cent inflation.

At the same time, financial stability risks remain elevated. Of particular note are the vulnerabilities associated with household debt and rising housing prices. And we must acknowledge that today’s action could exacerbate these vulnerabilities. However, as we noted in our Financial System Review, financial vulnerabilities would usually translate into full-blown risks — with attendant consequences for the economy — only if there was a trigger, such as a widespread and sharp decline in economic activity and employment. The terms-of-trade shock we are experiencing, which has already translated into an increase in excess capacity and downward pressure on inflation, has the potential to act as such a trigger, if left unaddressed.

Accordingly, the Governing Council agreed that acting at this time was consistent both with the Bank’s primary mission — the pursuit of its inflation target — as well as helping to manage financial stability risks, even if there could be some increase in financial vulnerabilities in the process.

Let me remind you that monetary policy operates with a long lag and there are many transmission channels through which interest rate changes affect the economy, including longer-term bond yields and the exchange rate. This needs to be taken into account when predicting how the economy will respond to our actions, and when. It also makes it difficult to pin down the precise timing when Canada will reach full capacity with inflation sustainably at target — it could just as easily be sooner as later than projected.

Let me also remind you that there are many uncertain elements and risks to our outlook, which are discussed in the MPR. One additional element I could mention is the prospect of interest-rate liftoff in the U.S. Although we have no special insight into when this might occur, we have said many times that it would be welcome, for it would be consistent with a more positive outlook for the U.S. economy. Nevertheless, because the Canadian economy is dealing with a large terms-of-trade shock, it is likely to be less synchronized with the U.S. economy than in the past. Furthermore, we would expect any rises in global bond yields to be at least partly imported into Canada — with possible implications for the Canadian dollar — and with an uncertain net effect on our economy.

To conclude, the Canadian economy is undergoing a significant and complex adjustment, even while it is still trying to overcome persistent global headwinds. In the judgment of the Governing Council, today’s action is required to help facilitate the adjustment of the economy to this unusual situation.

With that, Carolyn and I would now be happy to take your questions. 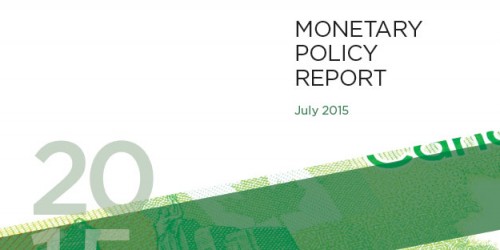 Media Relations Ottawa, Ontario
The Bank of Canada today announced that it is lowering its target for the overnight rate by one-quarter of one percentage point to 1/2 per cent. The Bank Rate is correspondingly 3/4 per cent and the deposit rate is 1/4 per cent.
Content Type(s): Press, Press releases
July 15, 2015 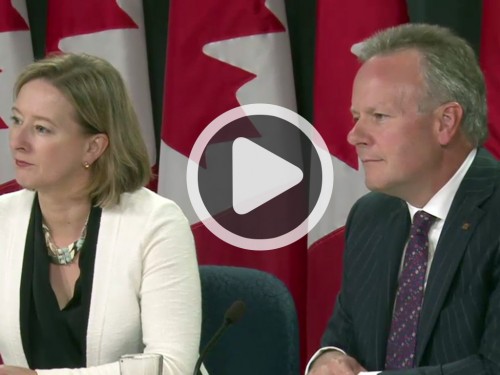 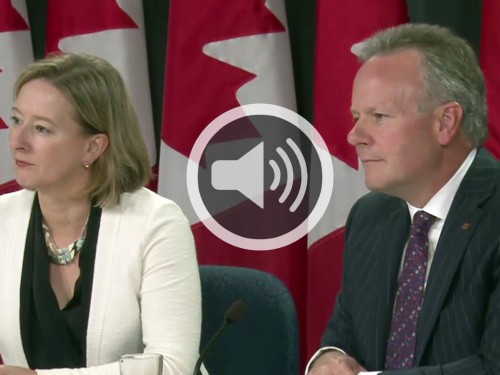