The Bank of Canada’s monetary policy is appropriate to return Canadian inflation to its 2 per cent target as worldwide economic uncertainty lingers, Governor Stephen S. Poloz said today in Toronto.

The global economy is facing significant headwinds that could restrain growth for a prolonged period, including efforts by households and financial institutions to reduce their debt and those by governments to bring their fiscal situation back toward balance, Governor Poloz told attendees at the annual conference of the Canadian Council for Public-Private Partnerships.

“Probably the most important headwind is lingering uncertainty about the future, whether from geopolitical developments, market volatility, or just the trauma that companies have been through,” he said. “We are confident that these headwinds will dissipate in time, but in the meantime interest rates will remain lower than in the past in order to work against those forces.”

The Bank of Canada has adopted a risk-management approach to incorporate these elements of uncertainty directly in its policy decision-making and clearly communicate them to Canadians, Governor Poloz said, citing the ranges the Bank now provides when it presents forecasts of key variables like growth, inflation, the output gap and the neutral rate of interest.

The prolonged global economic cycle has taken its toll on Canada’s export sector, the Governor also said. After studying more than 2,000 categories of underperforming non-energy exports, the Bank found that for about a quarter of them the value of shipments fell by more than 75 per cent since 2000, creating a shortfall of about $30 billion relative to the historical norm and destroying the associated jobs.

“The good news is that these destructive effects of the recession and slow recovery should be reversible over time,” Governor Poloz said. “A sustained expansion in our exports will not only represent new demand, it will ignite the rebuilding phase of our business cycle, which through increased investment will create new supply and new jobs. This virtuous cycle will continue until the excess capacity in the labour market is reabsorbed.”

While some fear that keeping interest rates low will sow the seeds of the next financial crisis, Governor Poloz observed that the alternative would be much worse. The Bank estimates that if the policy interest rate had been at 3.5 per cent in both Canada and the U.S. since the beginning of 2011, Canada’s unemployment rate would be 2 percentage points higher today and core inflation would be well below 1%.

“From this monetary policy-maker’s perspective, that’s an unattractive alternative,” Governor Poloz said. “Our primary job is to pursue our 2 per cent inflation target, with a degree of flexibility around the time horizon of its achievement; that flexibility permits the Bank to give due consideration to financial stability risks, provided they do not threaten macroeconomic performance.”

The Legacy of the Financial Crisis: What we know, and what we don’t 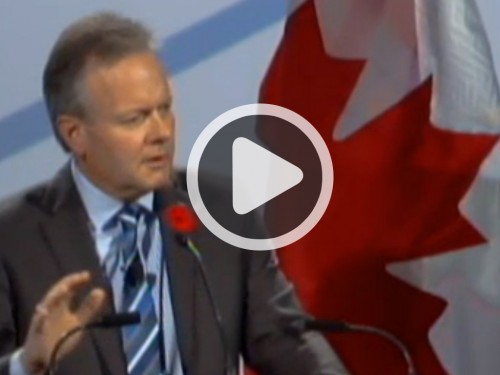 The legacy of the financial crisis, what we know and what we don’t - Stephen S. Poloz, the Governor of the Bank of Canada, speaks before the Canadian Council for Public-Private Partnerships (CCPPP) (12:50 (ET) approx.)

The legacy of the financial crisis, what we know and what we don’t - Stephen S. Poloz, the Governor of the Bank of Canada, speaks before the Canadian Council for Public-Private Partnerships (14:00 (ET) approx.) 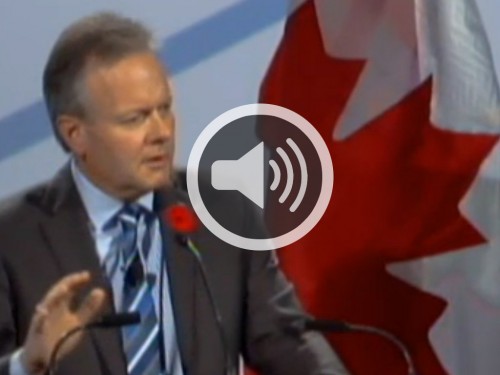 The legacy of the financial crisis, what we know and what we don’t - Stephen S. Poloz, the Governor of the Bank of Canada, speaks before the Canadian Council for Public-Private Partnerships (CCPPP) (12:50 (ET) approx.) and Press Conference (14:00 (ET) approx.)