It is a great honour for me to be here to complete the launch of the Frontiers series of bank notes. As of today, we are releasing the new $5 and $10 polymer notes, which are now ready to join the twenties, fifties and even maybe a hundred or two that have already made their way into our wallets.

One of the most important functions of the Bank of Canada is to design and issue bank notes that are hard to counterfeit so that Canadians can use them with confidence. With this new, innovative series, the Bank has produced some of the most secure bank notes in the world.

As Governor of the Bank, I join all my colleagues in expressing our pride in the Frontiers series. It is aptly named since each bank note pushes the frontiers of security and technological innovation to maintain low counterfeiting levels and ensure that confidence in cash remains strong.

The images on the bank notes also speak to the theme of frontiers. Each tells a uniquely Canadian story. With the $100 note, the story is medical innovation, including the discovery of insulin and the invention of the pacemaker. On the $50, we evoke our far north and Arctic research. On the $20, the image of the Canadian National Vimy Memorial reminds us of the valour and sacrifice of Canadian soldiers in military conflicts throughout our history.

The bank notes we are issuing today continue this tradition. The new $5 and $10 bank notes tell a story about the frontiers of our country and even our universe.

The $5 note highlights Canada’s technological achievements that look skyward - our contributions in robotics to the International Space Station Program.

The $10 note depicts a great feat of engineering from Canada’s past - the joining of east and west by rail.

This is where the bank note story gets personal for me. I grew up hearing about George Stephen, whom I am named after. He was president of what was then the new railway company, and was the principal financier of the building of CP rail.

By all accounts he was a man who shunned the limelight and who said about himself that he had neither the training nor the talents to accomplish anything without hard work. Well, without his hard work, we may not have had the Canadian Pacific Railway. The building of the CPR was years in the making and involved the hard work and sacrifices of thousands. It was a monumental undertaking - a feat of engineering and nation building.

Our speakers today have reminded us that our bank notes reflect the people and the society where they are used.

Canada is a world leader in using innovation for secure bank notes.

Work on this series started eight years ago, in 2005. It’s not that we work slowly at the Bank of Canada - that’s how long it takes to reach new frontiers in bank notes using a new polymer material and state-of-the-art security features. Well over 700 million are now in circulation.

With this series, the Bank sets a global benchmark for currency. It’s a big change and we are working closely with the cash handling industry, including financial institutions and retail associations to finalize the transition from paper to polymer and make sure it is a smooth one.

And though we are very proud of these bank notes, we are not standing still.

That’s because neither technology nor counterfeiting stands still. You can be sure that at the Bank of Canada we will continue to innovate and apply new technologies so that we stay ahead of the counterfeiters.

Media Relations Ottawa, Ontario
The Bank of Canada has announced the entry into circulation of the new $5 and $10 polymer bank notes. Starting today, these final two notes in the new polymer Frontiers series will be available at financial institutions across Canada.
Content Type(s): Press, Press releases Topic(s): Bank notes
November 7, 2013 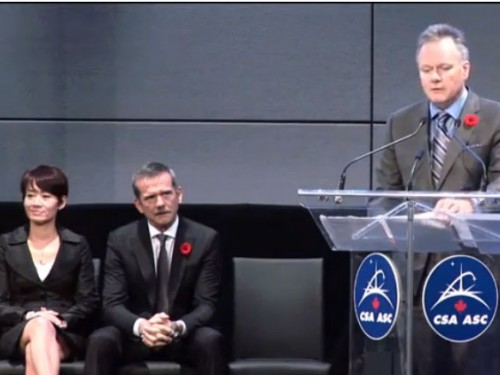