The Bank of Canada today announced the entry into circulation of the new $20 polymer bank notes, during an official ceremony at the Canadian War Museum. Starting today, these new notes will gradually become available at financial institutions across Canada.

Bank of Canada Governor Mark Carney was joined at the event by Minister of Finance Jim Flaherty, Minister of Veterans Affairs Steven Blaney, and David Houghton, President of the Vimy Foundation.

“The introduction of the $20 note is an important milestone for the new Polymer series. Making up half of all bank notes in circulation, the $20 note is the most used denomination,” said Governor Carney. “Our safer, cheaper, greener polymer notes will soon be part of Canadians’ daily lives. That is why the Bank of Canada has been working closely with Canada’s financial sector and the cash-handling industry since 2009 to help prepare for and support a successful transition to the Polymer series.”

The front of the new $20 note features a portrait of Her Majesty Queen Elizabeth II, Queen of Canada, while the imagery on the back of the note features the Canadian National Vimy Memorial. This iconic monument, located in Vimy, France, commemorates the 1917 Victory at Vimy Ridge and honours Canadians who fought and gave their lives in the First World War in France and who have no known grave.

“It is fitting that we are launching these new notes at the Canadian War Museum only a few days before Remembrance Day. These new notes pay tribute to the sacrifices of Canadian men and women who fought to protect Canada and its allies in all military conflicts,” said Minister Flaherty. “They also protect Canadians from the threat of counterfeiting. The Polymer series is a Canadian innovation of which we can all be proud.”

Minister Blaney spoke of the special significance to Veterans of featuring the Canadian National Vimy Memorial on the $20 note. “With these notes, Canadians are honouring the contributions and sacrifices of our military men and women, a powerful sentiment that will resonate strongly with our Veterans and their families.”

Vimy Foundation President David Houghton added, “Each time we open our wallets, we will be reminded of the significance of the Battle of Vimy Ridge in Canadian history - a pivotal moment when our country came of age.”

The remaining bank notes in the series - the $5 and $10 notes - will be issued by the end of 2013. Their designs and detailed images will be released when the notes are officially unveiled.

The themes of the denominations are:

$20 The Canadian National Vimy Memorial - evokes the contributions and sacrifices of Canadians in conflicts throughout our history (Portrait: HM Queen Elizabeth II)

$10 The Canadian train - represents Canada’s great technical feat of linking its eastern and western frontiers by what was, at the time, the longest railway ever built (Portrait: Sir John A. Macdonald)

Release of the $20 Bank Note

The Bank of Canada is responsible for supplying Canadians with bank notes that they can use with confidence.
July 21, 2010

The Bank provides live video and audio webcasts of major speeches and press conferences presented by the Governor.
June 20, 2011 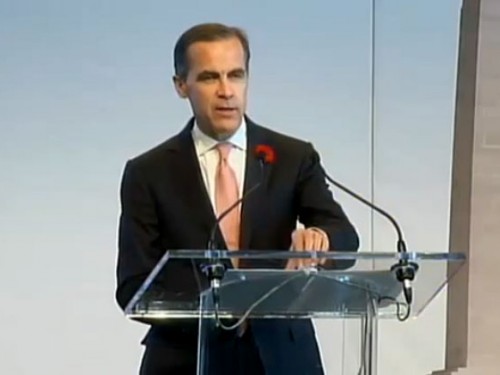 Release of the $20 Bank Note - The Bank of Canada will begin circulating the new $20 bill, Canada’s most widely used bank note, on Wednesday, 7 November 2012. A ceremony to officially issue the new $20 note, which pays tribute to the contributions and sacrifices of Canadian men and women in all military conflicts, and features the Canadian National Vimy Memorial on the back of the note, will be held at the Canadian War Museum in Ottawa.