While the “Great Recession” is over, “what has followed is an unfamiliar process of repairing public and private balance sheets across advanced economies,” Bank of Canada Governor Mark Carney said today in a speech to the Vancouver Island Economic Alliance. He noted that the depth and duration of this deleveraging are unclear. It is holding back the global recovery and laying bare distinct challenges in different parts of the world. Against this background, it is not surprising that uncertainty over the global economic outlook is high.

First, Europe is often said to be suffering an existential crisis - meaning that the very existence of the euro is being questioned. Recent actions, particularly by the European Central Bank, are now directly addressing this risk. Second, it would be helpful if European authorities would reframe the expectations of citizens and market participants. In the Bank of Canada’s view, several reforms over a 3 to 5 year period will be required.

In China, economic growth has slowed, and there remains significant uncertainty over how quickly it can adjust its growth model. That said, it is important to put China’s recent performance in context. Despite its slower growth, it will continue to add substantially to global demand.

Recent actions by the U.S. Federal Reserve, including QE3, have reduced uncertainty with respect to the U.S. economy. However, uncertainty remains about the “fiscal cliff.” While the Bank of Canada assumes that U.S. authorities will step back from it, the need for fiscal consolidation persists. “A clear, consistent and committed medium-term U.S. fiscal plan, one that demonstrates how this consolidation will be achieved, would be helpful in mitigating a major uncertainty that would otherwise endure,” the Governor said.

While Canada’s economy is inevitably being affected by global angst, the key areas of uncertainty abroad are all points of justifiable confidence here at home. The Bank takes all developments into account when setting monetary policy, and provides as much certainty as it can in the conduct of monetary policy. “While we obviously cannot determine events over which we have no control, we can be transparent about what we expect and how we would react to different scenarios,” he said. “The Bank will take whatever action is appropriate to achieve the 2 per cent CPI inflation target over the medium term. That certainty is our contribution to ensuring that Canadians can invest and plan with confidence.”

“We must take care not to allow uncertainty to dominate our actions, letting profitable opportunities slip away and, more generally, compounding the very real, but still manageable, challenges facing the global economy,” Governor Carney concluded.

Uncertainty and the Global Recovery 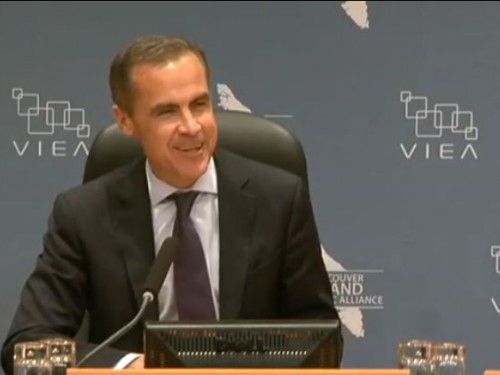 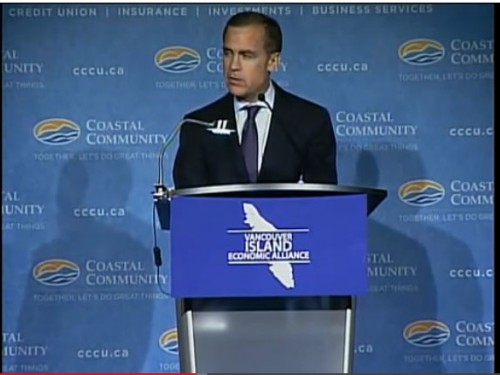