Globalisation is changing the nature of production and driving up the demand for skilled workers in advanced economies, including Canada, Bank of Canada Governor Mark Carney said today in a speech at a Canadian Auto Workers convention.

“We all need to recognize that the durable, high-paying manufacturing jobs of the future will be located in companies that invest to equip and train their workers and which are fully engaged in the global economy,” Governor Carney said.

Governor Carney noted that the first wave of globalisation at the turn of the last century dramatically lowered transportation costs and the growing prevalence of large factories promoted the concentration of production and manufacturing employment. In the current wave, which began in the late 1980s, huge advances in communications and computing technologies have dramatically lowered the costs of coordination across stages of production. This has promoted the distribution of these stages to the most cost-effective locations. Therefore, competitive advantage will increasingly be concentrated in specific stages of production rather than specific sectors.

For Canada to prosper, labour, business and governments need to build on the country’s advantages, which include sound fiscal and monetary policy; a resilient financial sector; domestic inefficiencies that can be eliminated for employment and profit; under-exploited opportunities in the most dynamic economies in the world; and, most importantly, a highly trained workforce eager to learn new skills.

International efforts to strengthen global financial stability - which include building resilient financial institutions, ending too-big-to-fail, creating continuously-open markets, and strengthening the regulation of shadow banking - will ensure that businesses can get the capital they need to invest and hire, while helping to protect Canada from sudden shocks from abroad. “Canada learned during the last crisis that having our own house in order is not enough. We need others to raise their game,” the Governor said. “That is why the Financial Stability Board is increasingly focused on timely and consistent implementation of agreed reforms.”

Governor Carney said the global economic environment remains challenging. In recent months, there has been a widespread slowing of activity across advanced and emerging economies. Europe has slid back into recession and its crisis, while contained, remains acute. The U.S. economy continues to grow modestly, restrained by ongoing deleveraging and considerable uncertainty surrounding the fiscal cliff and the European situation.

While these global headwinds are restraining Canadian economic activity and there are some short-term special factors weighing on growth, current underlying momentum is at a pace roughly in line with the growth of the economy’s production potential. Economic growth is expected to pick up through 2013, the Governor said. 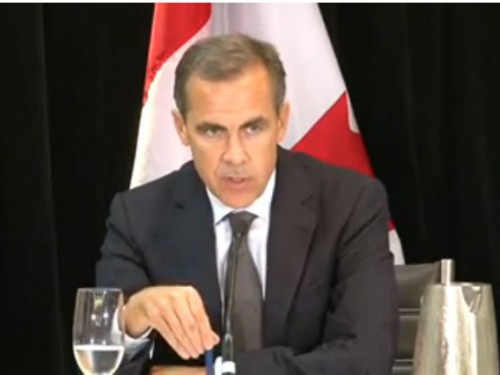 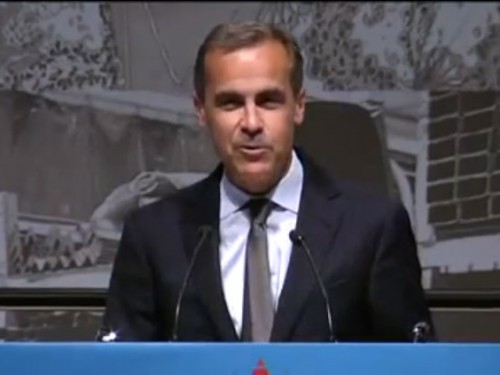